Following the recent mass demonstrations in Iraq and their violent suppression by the government's security forces, the Central Committee of the Iraqi Communist Party issued a statement asking for the resignation of the government and the call for snap elections.

The final results issued on 22nd October 2019 by the government committee to investigate the bloody repression of the demonstrations on 1st October 2019, and their conclusions and recommendations, have shown that the last hope that the government and its institutions would bear the political and criminal responsibility for the killing and wounding of thousands of unarmed innocent people has completely dissipated, just as the hopes for the government to complete its program, on the basis of which it had won the confidence of the parliament a year ago, were dashed.

Therefore, it has become clear that the moment of real change has come, and it is time to open the path toward a new and different situation, that would finally launch the reconstruction of the country and secure dignity, freedom and decent living for the people, in a state of citizenship, true democracy and social justice.

Sparing our people and country the negative and dangerous possibilities, and to ensure a peaceful, democratic and smooth transfer of power in accordance with the Constitution, requires:

The resignation of the existing government and the formation of a new government composed of competent, honest and effective national personalities, a government with exceptional powers, which is formed away from the policy of political sectarianism, the abhorrent quota system and the system of corruption. 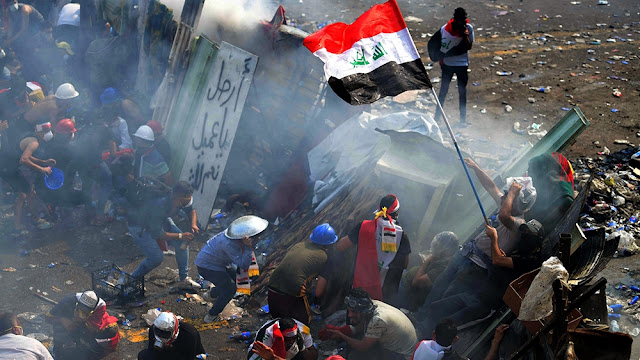 The principal tasks of the new government should be as follows:

A- To carry out immediate steps to secure the people's livelihood, respond to their urgent needs, and reform the country's economic, social and service conditions.

B- To bring just retribution to those who committed the crimes of killing the demonstrators and those who issued orders to them, to release the detainees and those whose whereabouts are still unknown, and to stop the pursuit and detention campaigns.

C- To act on the cases of corruption and bring the corrupt to justice and recover the looted public money.

D- To put arms under the control of the State and end the role of the militias and illegal armed elements.

E- To preserve the sovereignty of the Iraqi state and secure the independence of national decision-making.

F- To prepare for early elections provided that they are preceded by:

Enacting a new democratic and fair electoral law for the Parliament and the Provincial Councils, which enshrines the principle of citizenship.

The election of a new High Electoral Commission, that is truly independent and includes competent persons not belonging to political parties and blocs and under the supervision of the judiciary.

Finally, we must encourage and support the peaceful popular movement, and the continuation of its momentum, until the achievement of the objectives of the people and their afore-mentioned demands.