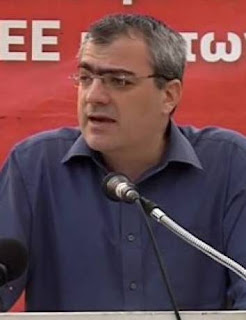 The anticommunist conference-provocation of the Estonian Presidency of the EU is no bolt from the blue. Similar anti-communist events being organized in the framework of the so-called "European day of remembrance for the victims of totalitarian regimes", as the EU with enormous budgets is trying to establish the 23rd of August. This is an orchestrated campaign that aims to slander socialism, rewrite history, and to unacceptably and provocatively equate communism with the monster of fascism. I.e. equating Nazism with the forces that in historical terms smashed it.

A basic goal is to conceal the fact that fascism is a form of capital's power in specific conditions. In Germany, Nazism constituted the ideal form to support capital in the conditions of the military preparations for the conquest of new markets, in the conditions of a very deep capitalist crisis, of the rise of revolutionary ideas, of the increase of the prestige of the KPD and the USSR. It was supported politically and financially by sections of German capital, it identified with monopolies (Krupp, I.G.Farben, Siemens etc.), it collaborated with the colossi of the "democratic" capitalist states (General Motors, General Electric, ITT, Ford, IBM).


Nazism-fascism met its deadliest and most determined opponent in the socialist society of the USSR, which was established by the October Revolution 100 years ago. The 20 million dead soviets was the bloody proof of this deadly confrontation between socialism and Nazism. The communists in every country were the most determined and combative anti-fascist force, with the role of the KKE and EAM in our country being a characteristic example of this.
The  anti-communist campaign of the EU, of this capitalist union, goes hand in hand with the offensive against the workers'-people's rights and has been going on for many years.

The wretched anti-communist memorandum of the Council of Europe in 2005 lent impetus to these anti-historical efforts. However it did not gain the necessary majority in the Parliamentary Assembly of the Council of Europe that would have made the measures that accompanied it compulsory for the member-states.
Through the decisive contribution and mobilization of the KKE, it met with the broad and mass condemnation of the Greek people and other peoples of Europe, of trade unions and other mass organizations, of public figures. The then governments of Greece, Portugal and Cyprus expressed their intention not to support it. The majority of MPs, MEPs  of the Greek bourgeois parties stated their opposition.

There followed the anti-communist resolutions in the European Parliament in 2006 and particularly the resolution of April 2009 entitle "European consciousness and totalitarianism", it should be noted that no Greek MEP voted in favour of it.  There then followed other anti-communist proclamations and decisions of the EU.
Beyond the declarations and resolutions, practical anti-communist measures are being pushed forwards in a number of EU member-states (e.g. Poland, Hungary, Latvia, Estonia, Lithuania) as well as in countries connected to it (e.g. Ukraine). We are referring specifically to the persecution, prosecution, and condemnation of communists, bans on the activities of the CPs, bans on communist symbols etc.

A self-evident consequence of the anti-communist campaign is the justification, prettification and exoneration of Nazism-fascism and its atrocities. In these countries, honours are bestowed on, pensions and privileges granted to the Nazi collaborators and their political descendants are being promoted.

This year, the EU generously financed the "House of European History" in order to promote its anti-historical anti-communist proselytizing while for years it has been organizing the anti-communist programme "Europe for citizens" in order to slander socialism, with the involvement of local municipalities, NGOs etc.

Several forces utilized the opportunity provided by the anti-communist fiesta in Estonia to rear their heads. Primitive and crude anti-communism, in which ND plays the leading role, followed by PASOK and POTAMI, together with of course Nazi Golden Dawn, copies all the propaganda with aim of slandering socialism, the USSR, with the aim of falsifying the history of the peoples. The absence of the government from this year's anti-historical anti-communist fiestas in Estonia cannot conceal the fact that the forces of SYRIZA in the movement are propagandizing-overtly or covertly-the equation of Stalin with Hitler, are playing a leading role in anti-soviet and anti-communist propaganda, while they hide or distort the relationship between capitalism and fascism.

A characteristic example of the government's hypocrisy is that fact that a representative of the government has attended similar anti-communist events last year in Bratislava, something the KKE had denounced, while a few weeks ago, on July 15th, "Avgi" published a vulgar article propagandizing the equation between communism and fascism.

The people's experience proves that escalation of anticommunism is a precursor for new anti-people measures and restrictions on people's rights, a precursor for the launching of a new round of imperialist wars. The struggle for the abolition of the anti-communist persecution and bans, the struggle against anti-communism, for the satisfaction of the contemporary needs of the people and their rights, is integrally linked to the struggle for workers' power, for the working class and popular strata to be emancipated from the shackles of capitalist exploitation and the imperialist unions, for the peoples to become the owners of the wealth they produce.

Whatever they try to do, history is not going to be rewritten with blue, green or black letters. It has been written with the blood of the millions of militants and communists who fought Nazism-fascism. It is in the hands of the peoples today to join forces with the communists in order to consign capitalism, which creates poverty, wars, fascism-Nazism and its nostalgists,  to the dustbin of history.

* Member of the CC and MEP of the Communist Party of Greece (KKE).