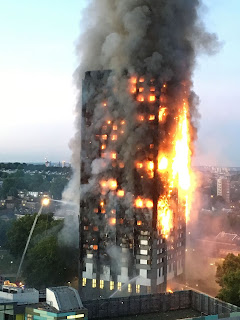 IN THE 1990s Tory grandee Lord Heseltine declared that his party would make “a bonfire of red tape” – getting rid of rules and regulations that hindered maximum profit-making and including health and safety regulations. In 2009 Boris Johnson, as mayor of London, declared that “safety fears” were “mak- ing the UK safe for extremely stupid people”. And in 2011 the then Prime Minister David Camer- on said: “I will kill off safety culture; we need to realise, collectively, that we cannot eliminate risk and that some accidents are inevitable.”
On Wednesday morning 14th of June we saw the terrible consequences of their en- deavours as the giant Grenfell tower block in Kensington became a flaming inferno in a very short time, because in a cheap cosmetic ‘renovation’ two years ago it had been fitted with flammable plastic and aluminium cladding. This type of cladding has been involved in several fatal fires and is now banned in many countries. The block was owned by the Royal Borough of Kens- ington and Chelsea (RBKC), but control and administra- tion had been outsourced to the Kensington and Chelsea Tenant Management Organ- isation (KCTMO) who sup- posedly manage all social housing in RBKC on the Council’s behalf. Responsibility for fire safe- ty inspections was also trans- ferred to KCTMO from the fire brigade as Boris Johnson was making drastic cuts to the London Fire Service.
Tenants had complained for years, over and over again, about fire safety issues and dangerous electrical surges that destroyed some of their appliances. They formed the Grenfell Action Group (GAG) and ended up being threatened with arrest if they did not stop “harassing” the council and its agents. “All our warnings fell on deaf ears and we predicted that a catastrophe like this was inevitable and just a matter of time,” they said. The fire that started it all was a small one in a kitchen, which the fire brigade dealt with quickly. They were pack- ing up ready to go when they noticed that the cladding on the outside of the building had caught alight. From there it quickly turned into the worst fire disaster in Britain since the Blitz.
[VIDEO] THE GRENFELL MASSACRE: BURNING & LOOTING.
By ProletarianTV.


In its leaflet under the title "Housing: a crisis of Capitalism", the Communist Party of Great Britain (Marxist-Leninist) points out the following:

The horrific fire at Grenfell Tower in London, which has killed so many working-class people, demonstrates the terrible reality of housing in Britain today.

In the capital’s richest borough, with house prices over 38 times the average annual salary, people ultimately died because flammable cladding cost the borough and construction companies a mere £5,000 less per metre.

The unnecessary cladding, which would have made residents’ fuel bills marginally cheaper, had the effect of prettifying the tower for the surrounding neighbourhood of luxury properties, and raising the value of nearby council-owned land.

Kensington and Chelsea council spent £8.6m on the ‘refurbishment’ of the tower, while ignoring, or rather hiring companies to ignore, the needs of residents. The Grenfell Action Group has comprehensively documented problems and complaints made to the council over the years, including power surges and faulty wiring.

Grenfell must be seen in the context of ongoing social cleansing in London, which has already seen thousands of families conned or evicted from their homes so that property developers can create investment opportunities for the super-wealthy.

Around 1,400 homes in the borough remain empty year-round, at a combined value of £664m, and house prices in Kensington and Chelsea have tripled in the past 20 years.

No inquest or inquiry into Grenfell will provide justice for the dead or security for the survivors. While some companies, CEOs and public of officials may receive fines and jail time, and some survivors have been housed in new luxury flats, the reality is that the working class in Britain will never have safe, affordable and secure housing while the capitalist system remains.

A ladder with no bottom rungs

House prices across Britain are now, on average, 7.6 times the average annual salary – a figure which has more than doubled in the past 20 years.

The median price for a home increased by 259% over this period, while average earnings only rose by 68%. This gap is getting steadily wider, so that each year 70,000 more people are priced out of the market – one third of them in London alone.

Young people needing a home today find there is no council housing available and are thus forced onto the mercy of a private rentals market in which rents are extortionate, conditions often poor, and security nil.

To even consider buying, not only do they need to earn above-average wages, but they often also have to look far away from work, friends and family. Commutes of well over an hour are now common. 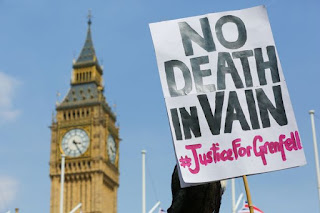 The vast majority of new houses today are being built by private developers, not for sale or rent to ordinary workers but as investment opportunities for the rich.

Instead of building and maintaining social housing, the government is using the housing budget to subsidise private developers and keep their profits high.

One scheme offers a 20 percent discount on small ‘starter homes’, but, with an average price of £215k, these are way out of reach for most workers. Similarly, ‘help to buy’ offers a deposit loan of up to 20 percent of purchase price.

While such measures may help better-off first-timers into a home (and a crippling debt burden), the schemes are at the same time pricing out millions more by stimulating an overheated market and further inflating prices.

And the pulling down of working-class housing estates in desirable city-centre locations (so that the sites can be redeveloped commercially) is adding fuel to the fire.

The drive to ‘invest’ in housing has ultimately been created by the global capitalist crisis of overproduction, as opportunities for productive ways to make profits have dried up. These estate demolitions, while driving thousands of workers out of previously secure homes and into the waiting arms of private landlords (driving up rents and pushing down standards for most) are making room for yet more luxury developments in which the super-rich can rest their surplus capital.

Decent homes for all

There are over 700,000 empty houses in Britain, 19,845 of them in London (the London properties alone are worth £9.4bn in total). In recent years, hundreds of thousands of half-built homes have been demolished in order to preserve high prices.

Despite a minor slow-down in the rate of increase of property prices, and a minor panic after Brexit, our ruling class is using every trick available to it to keep prices high.

The CPGB-ML holds that houses should be homes for people, not investment opportunities for billionaires. The rights to shelter and to a secure family life are fundamental human rights.

By its utter inability to solve the housing question and meet this basic need of working people, the capitalist system is providing yet more proof that it is well past its use-by date and due for demolition.

1. The immediate scrapping of the 2016-17 housing bill, which threatens hundreds of thousands with poverty and homelessness.

2. The end of the ‘right to buy’ and the scrapping of all other schemes that fuel prices, create shortages and offer subsidies to landlords and developers.

3. The return of housing association and ‘non-profit’ properties to council ownership, the abolition of housing charities and the reintroduction of the legal right to decent, secure housing for all; slums, overcrowding and homelessness are an indictment on capitalism and a crime against humanity.

4. The confiscation of all empty homes and unfinished developments and their transformation into council housing.

6. Guaranteed, secure and well-maintained social housing for all who want it, close to people’s work and families, and the abolition of divisive allocation criteria.

7. The introduction of a rent cap at 20 percent of minimum wage for all privately rented accommodation, and the scrapping of housing benefit (a subsidy to landlords that has helped to fuel rent rises).

8. The establishment of residents’ management committees to oversee planning and maintenance and ensure that all workers have access to adequate space, necessary amenities and decent facilities, including having usable and pleasant outdoor spaces and community halls.

The CPGB-ML believes that the welfare of workers can only be safeguarded by a socialist system of economy, controlled and administered by the working people themselves.

Let the capitalists’ ministers try and show us otherwise; let them start by meeting this list of simple demands.