Dimitris Koutsoumbas at KNE anti-imperialist camp: "Our future is not capitalism; it is the new world, Socialism!"


This year's anti-imperialist camp of KNE took place at the Pirsinella Park, close to Ioannina, where numerous young men and women had the opportunity to participate in many cultural and political events, walks, visits to historical places such as the former military prison in Kalpaki where hundreds of communist and leftist soldiers were imprisoned by the bourgeois authority during the 20th century.

With the slogan "A century of struggle and sacrifice, the KKE at the forefront" and hundreds of red flags, numerous young men and women welcomed Secretary Koutsoumbas who refered to the heroic history of KNE, from its beginning as OKNE (founded in 1922) until the contemporary years, praising the courage and militancy of many young communists who stood against dictatorships, repressions, persecutions etc.

Secretary Koutsoumbas made extensive reference to the contemporary political developments, condemning the bourgeois parties- the SYRIZA-ANEL government as well as the opposition of New Democracy- for their antipeople strategy and effort to promote the interests of the capital. The KKE Sec. General underlined the danger of an imperialist war in the broader region, the dangerous plans of NATO-US-EU imperialists and the need to strenthen the struggle against these imperialist plans and the country's participation in them. 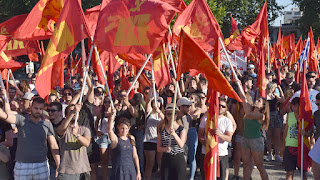 D.Koutsoumbas also mentioned the two historical anniversaries in 2018, marking the 100 years since the foundation of the KKE and the 50 years since the establishment of KNE. "We are marching towards the celebration of these two great anniversaries with militant optimism. We study the history of the revolutionary workers movement. We are inspired, taught and draw valuable conclusions for our contemporary struggle" he said among other things.

The Secretary General of the KKE concluded his speech with optimism for the future, under the applause and slogans of the crowd. "Our future is not capitalism; it is the new world, Socialism! We are marching onward, powerfully. Always faithful to the red banner, for the people's power and honest life. We will win!".