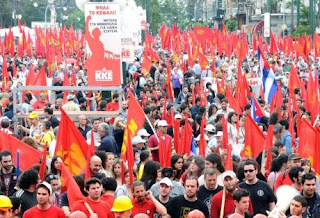 The Greek people can and must choose themselves- with their will and action- the exit from the EU, to put this objective on the forefront of their slogans, by organizing their struggle in such a way to simultaneously assert the "keys" of the economy, the wealth that they produce, with the transition of power to their hands. That consists an actual alternative for the benefit of the people and worths every sacrifice.


Capitalist Greece with a "national currency" does not consist rupture for the people's benefit. The adoption of a more undervalued currency cannot be a link of improvement for the life of the working class and the popular strata through any possible inpulse that will be given to the competitiveness and growth due also to the cheaper labor force, as a consequence of the devaluation. Any eventual recovery of the capitalist production, whenever it may occur, will not be accompanied by a substantial recovery of wages, pensions, rights; it will not benefit the people.

The political forces which highlight such an objective as a "solution" or as an intermediate aim for radical changes, objectively, at least, serve the special needs of sections of the capital and more broadly the variations of bourgeois policy as a result of the intensification of her contradictions. Besides, policies of attack against working-popular achievements are being applied both in countries of the eurozone as well as in capitalist countries with national currencies.

If the EU and the bourgeois class choose Greece's secession from the Eurozone and currency change, the KKE will fight, like it does now, with a specific line, which will promote within the movement and the Greek people. It will militantly intervene in order to organize a more decisive struggle for the people's survival, for solidarity, so that not any popular family, no worker, no unemployed person will be alone in the more sharp impacts of currency changeover (black market, sharp, large inflation rise), in the nails of banks and speculators. The workers-popular movement must connect this fight with the struggle for actual rupture with the capitalist system.

The workers-popular movement in Greece and across Europe, with coordinated strikes and a comprehensive counterattack, must utilize any contradictions in the eurozone and the EU that create cracks, in order to strengthen the struggle for the overthrow of the capital's power, the conquest of workers power in every country which will promote and organize social ownership, the central scientific planning of economy and services, the production development for the people's benefit.