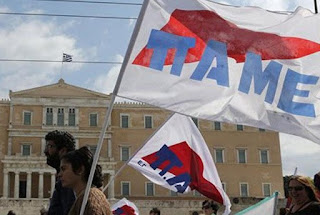 The All-Workers Militant Front (PAME) calls the unions to continue and escalate their fight against the unified attack of the Government – the Capital – the European Union, with massive participation of the workers in the demonstrations of PAME all over Greece in April 7.
In Athens the demonstration is going to take place at Omonia Square at 6.30 pm, in Thessaloniki at Venizelos statue at 6.30 and in Piraeus at Karaiskaki Sq. same time.
The General Secretary of the CC of the Communist Party of Greece (KKE) Dimitris Koutsoumbas is going to participate in the demonstration at Athens' Omonia sq.


PAME calls the trade unions, the federations, the Regional Labour Centres and workers’ committees, who are daily on the streets, in factories, offices and all the workplaces. Those who are the vanguard for informing the workers, in the organization of workers’ response to the brutal attack of the Industrialists, the Greek Government and the European Union.
The thousands of workers, who took part in PAME’s demonstrations declared:
Against the fatalism and the defeatism, against the disappointment and the compromise, the rich and multiform action of the class trade unions, the discussion, the information, their militant example in workplaces give hope and courage. They make workers more militant and mobilize them.
PAME calls the unions, the federations and the labour centres to address to the working class with decisiveness and militant spirit.
To reveal the lies of the SYRIZA Government, about the “Fair Growth” and the “Counterbalanced Measures”, in front of the workers. It seems like a “déjà vu” all over again. The working class doesn’t have to expect anything positive from the New Agreement.
With all of our forces and militant initiatives, we create the conditions to give Response against the brutal antiworkers’ measures with a General Strike.