The islands of Kastelorizo, Ro and Stroggyli in south-eastern Aegean was the destination of a short visit by Greece's Minister of Defense Panos Kammenos, the Chief of the General Staff Admiral V.Apostolakis and 9 members of the Parliament's Committee on Foreign Affairs and Defense. Among the members who accompanied Kamenos were 5 MPs from SYRIZA, 1 MP from the right-wing ANEL (Independent Greeks) party, 1 MP from the Center Union party and 2 members from the Nazi-fascist Golden Dawn!


The MPs of the Nazi-criminal Golden Dawn who appear in the photos, along with Minister Kamenos and SYRIZA MPs, are Ilias Kasidiaris and Christos Pappas. Neo-Nazis, admirers of Hitler and the Third Reich, both Kasidiaris and Pappas belong to the leading circles of Golden Dawn. 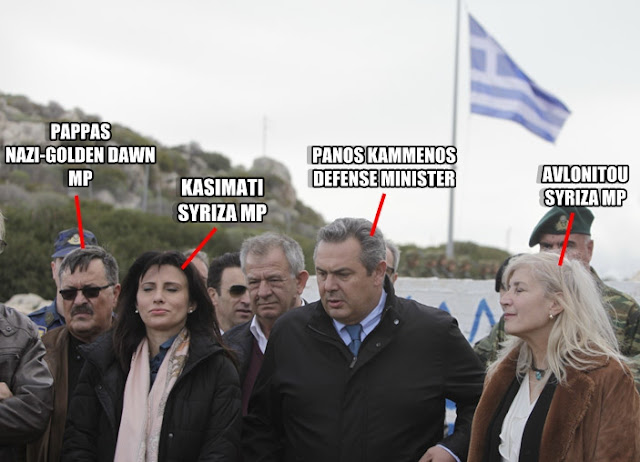 These are the two Nazis- Golden Dawn members- who appear in the photos with governmental officials and SYRIZA MPs:

Not enough? Lets see another one:

No MP from the KKE participated in this farce. The Press Office of the CC of the Communist Party of Greece issued a comment in which denounces the presence of Golden Dawn-Nazi thugs in Defense Minister's mission in Kastelorizo. "The setting of the mission, with the governmental SYRIZA-ANEL MPs, alongside the fascists of Golden Dawn, shows that such actions pave dangerous roads" states the KKE comment among other things.

It should be also noted that members of the Golden Dawn Nazi-fascist organisation have been prosecuted for establishing a criminal gang. The trial of Golden Dawn, which faces numerous charges for murders, violent attacks and other illegal activities,  is still under way. 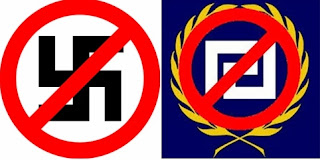 - Golden Dawn Trial: The murderous attack against the members of KKE and PAME was planned and organized.

- €600,000 for Hitler's political descendants: How the EU funds Neo-Nazi Parties.