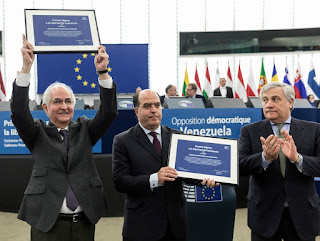 The European Parliament group of the KKE condemns the provocative act of the European Parliament to award the so-called Sakharov Prize to the reactionary opposition of Venezuela, the antigovernmental protests of which express sections of the capital with powerful relations with the USA and the EU, thus promoting the imperialist plans to this country and the broader region.
Read more »