A 60 year old worker was killed today at the construction site of the AEK FC new stadium in west Athens. The worker, who was a welder, fell from a high height resulting in fatal injury.

It must be noted that the man, alongside his fellow workers, were forced to work in dangerous posts, under extremely bad weather conditions.

When the tragic incident became known, members of the Communist Party of Greece (KKE) rushed to the construction site in order to be informed about the circumstances of the death and to express their solidarity to the workers.

Solidarity with the construction workers of Istanbul's new airport 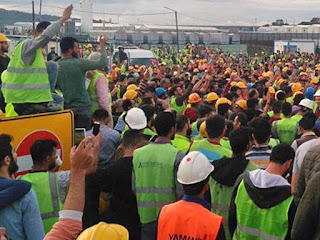 The Federation of Construction Workers of Greece, member of All-Workers Militant Front (PAME) and the World Federation of Trade Unions (WFTU), denounces the Turkish government that responded with violence, repression and arrests of workers who are working at the new Istanbul Airport, after the mobilization they made to protest the new labor accident, resulting in injury of 17 people.
We express our solidarity with the struggling workers of the construction of the new Airport.