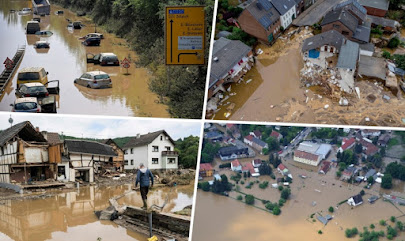 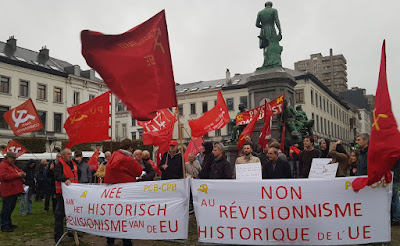 The demonstration was attended by the organizations of the Communist Party of Greece (KKE) and KNE in Belgium, as well as by the KKE group in the European Parliament.
Read more »

Mertens vs Martens.
By the Analytical Group of the Ideological Commission of the Central Committee of the Russian Communist Workers Party (RKRP).
In recent years, Communists of various countries have been anxiously witnessing the developments within the Workers Party of Belgium (PTB). Our close attention and interest in this party were caused by PTB’s being was one of the parties that actively contributed to the revival of the revolutionary trend of the international Communist movement after the counterrevolutionary coups of 1988-1991 in the USSR and Eastern Europe, when many of the Communist parties of Western Europe ceased to exist or moved to openly reformist positions.
Under these conditions, when bourgeois propaganda was talking about the death of Communism, the Belgian Workers Party, led by its then leader Ludo Martens, an outstanding Marxist theoretician, publicist and revolutionary organizer, initiated the International Communist Seminar in Brussels. These seminars, held since 1992, played an important role in the consolidation of Communists of various countries, in the theoretical understanding of the causes of current events as well as in developing  the strategy and tactics of Communist activity based on Marxist-Leninist theory in the new environment. 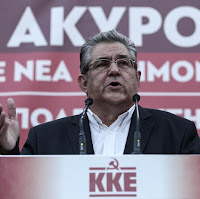 In his statement on the murderous attacks in Brussels, the GS of the CC of the KKE, Dimitris Koutsoumpas, stressed that:

"We condemn these murderous acts in Brussels and of course we express once again our full solidarity with the Belgian people and the families of the victims. These murderous acts in essence serve, further develop and increase the dangers of new interventions, new wars, the development of terrorist activity, as well as repressive measures against the peoples, the growth of xenophobia and racism, phenomena that must be avoided not just in Belgium, but in Europe and the world as a whole. From this standpoint, there needs to be vigilance and readiness on the part of all the people's movements."