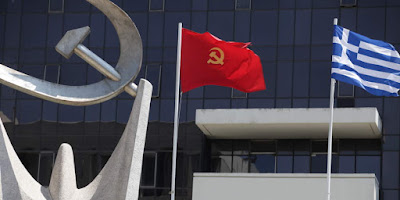 At the same time, the Greek government decided yesterday to suspend border crossing at Kastanies, sending additional riot police forces to the area. In a message, Greek PM Kyriakos Mitsotakis wrote: “I want to be clear: no illegal entries into Greece will be tolerated”, announcing the increase of border security.

In face of these developments, the Press Bureau of the CC of the Communist Party of Greece (KKE) issued a statement pointing out that the root cause of the refugee flows is linked to the interventions of the USA-NATO-EU, alongside Turkey, in Syria.

The KKE statement which was published on 902 portal, writes:

“Turkey's invasion in Northern Syria with the support of NATO, USA and the EU, as well as the escalation of the military confrontation with Syria and Russia, not only increases the dangers of a more generalized conflict, but also the waves of uprooted people.

It is once again proven that the competitions, the invasions and the dismemberment of countries, which were triggered in the broader region by the USA-NATO-EU with the participation of Turkey, are the root cause of the refugee flows.

Those who conceal this reality contribute to the various geopolitical games that are being played on the back of the refugees and the region’s people, like the games Erdogan’s government has been engaged to."