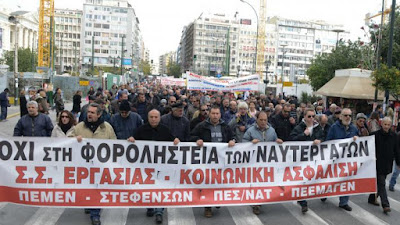 The 48-hour national strike was organized by Greece’s seamen federation (PNO), which said in a statement that negotiations with the sector’s employers over a new collective agreement that would include wage increases did not bear fruit. In its statement, PNO said that “for eight consecutive years, the seamen have not received not even a one-euro increase” and asked for passengers’ understanding and support.


The maritime workers' strike has the support of the All-Workers Militant Front (PAME) which characterized the mobilizations as "a struggle for all workers". Backing the demands of the class-oriented maritime workers' unions of PEMEN, STEFENSON and PEEMAGEN, a statement of PAME writes:

"The intensity of the attack by shipowners and the government of SYRIZA-ANEL at the expense of all the rights of the maritime workers, goes hand in hand with the deterioration of transports at sea, with the reduced composition of ship crews, exhausting routes and deadly work schedules of maritime workers, even undermining the safety of human life at sea. A typical example is last week’s fire at sea on the ship "El. Venizelos", which put in immediate danger the safety of human life of 875 passengers and 141 crew members.
The positive development of the maritime workers fight for better wages and restoration of rights will also contribute to the claims of workers of other sectors.
We call on workers, the unemployed, the self-employed, the retired people to express their solidarity in the just fight of the maritime workers.
To isolate the forces that once again promote "social automation". 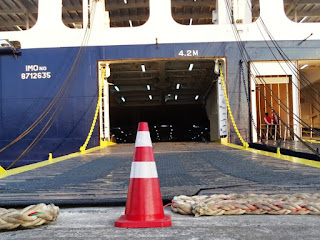 Our common enemy is the policy of shipowners, of the capital and their representatives, which are constantly exacerbating the living conditions of the working-people family. They step up their exploitation to increase their profitability."
It must be noted that since the announcement of the strike by PNO, the employers-affiliated media have unleashed a fierce propaganda against the decision of maritime workers, accusing them of creating problems to Greece's tourist industry.
However, it is a undisputed fact that, while shipowning companies have seen a boost in profits as a result of Greek tourism's growth, the condition of maritime workers' labor conditions, rights and wages have significantly deteriorated.
IN DEFENSE OF COMMUNISM ©