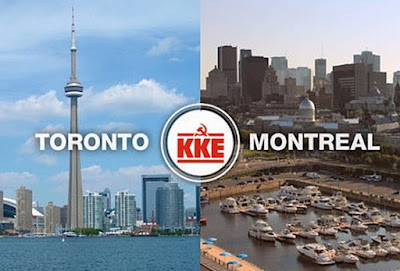 More specifically, the Society of KKE Friends in Montreal organizes on Saturday 6 October, at 18.00 local hour, a political and cultural event at the Workers' Association of Greeks of Quebec (5359 Av du Parc). The major speaker will be Zisis Lymberides, member of the Secretariat of the CC of the Party.


The programme includes greeting messages by local unions, a video dedicated to the 100 years of the KKE and the 50 years of KNE, a discussion with the subject "The political developments in Greece and internationally", as well as music devoted to the centennial of Greece's Communist Party.

A similar event will take place in Toronto, by the city's Society of KKE Friends, on Sunday 7 October at 18.00 local hour at the hall of the Hellenic-Canadian Democratic Union at 290 Danforth Avenue. A speech will be delivered by cde. Z. Lymberides.