Dimitris Koutsoumbas: "Socialism in the 20th century proved its superiority in comparison with capitalism" 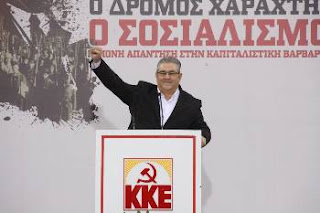 The Secretary General of the CC of the Communist Party of Greece, Dimitris Koutsoumbas, delivered the central speech during the KKE's political and cultural event for the 100 years since the Great October Socialist Revolution that took place on Sunday 26th November in Athens / Source: inter.kke.gr.

In his speech, the SG of the CC of KKE noted that “The October Revolution is neither an accident of history, nor a Bolshevik coup d’etat, as the capitalists declare and write, nor immature and early, as all kinds of apostates and oportunists-adventurists declare and write”  and added that “The October Revolution has been the climactic world-historic event of the 20th century that sounded the start of the era when the working class would become the protagonist of the developments and would push forward the wheel of history, taking over the power and organizing the new socialist-communist relations of production, reforming the whole society. (…) The October Revolution gave impulse to the international revolutionary movement and filled with optimism the struggle of the peoples around the world, accelerated the process for the founding of a series of communist parties. Our Party, is a product of the revolutionary flame of October. In a few days we will welcome year 2018, year of climax for the celebration of the 100 years of the honored and heroic Communist Party of Greece.”


D. Koutsoumbas underlined that “The Bolsheviks won because they worked with patience, with audacity, primarily because they worked with a plan of political, organizational and military preparation for the revolt in conditions of revolutionary situation” and added: “We hold up high the flag of revolutionary struggle. In our 20th Congress we placed the marker even higher, we put the urgent duty of consolidating the KKE. A strong KKE so that our party becomes able, as a party of social overthrow, to succeed in his historical vanguard role, utilizing and deepening the contradictions and antitheses of the capitalist system with the class struggle. A Party able to lead the struggle of the working class and of the whole people, for the regroupment of the trade-union movement, for the forward push of the social alliance in an antimonopoly – anticapitalist direction, against imperialist war, for the working class power.”

The SG of the CC of KKE underlined that “The working class has proved that it can, it has the ability and possibility, as the only truly revolutionary class, to bring about its historical mission, to lead the cosmogonia of the building of socialism-communism. Our eyes, our mind and our way of thinking, are not blurred by the counter-revolution and the overthrows that took place. That is why, today, our priority is the regroupment of the working class movement from the situation of recession that is in today, that today more and more workers realize who is the real enemy and where their struggle should be directed to. (...) No struggle gains class orientation, stability and endurance, when the worker adopts the aims of the capital, of the national and international bourgeoisie for “bigger competitiveness” as his own. (...)

In order for the working class to assert the power, it must form its own social alliance with the poor peasants, the oppressed strata of the city. With the struggle of the Bolsheviks, it became possible, that the poor peasantry ally with the revolutionary vanguard of the working class. That alliance came up victorious, the alliance of all the oppressed with which the soldiers sided, the sons of the people that where serving in the war.

This experience confirms that the hope, the alternative are not to be found in the summit agreements but in the alliance of all the oppressed, in the movement, where all can meet together and walk towards the road of clash in order to really ascend to power.

The experience of October has confirmed that the working class due to its place in capitalist production is objectively the only revolutionary class, the builder of the socialist-communist society and consequently the leading force in relation to the rest of the popular forces.

Our proposal of the social alliance corresponds to the effort that the popular strata, through the struggle, as potential allies of the working class, and their respective movements, to be pulled more or less actively in the revolutionary struggle, or to become neutralized.

The Social Alliance that the KKE is proposing, in anticapitalist-antimonopoly direction, has to do with social forces, namely, the working class, the salaried employees of the public sector, the self-employed professionals, small craftsmen, small tradesmen, scientists, self-employed farmers.” 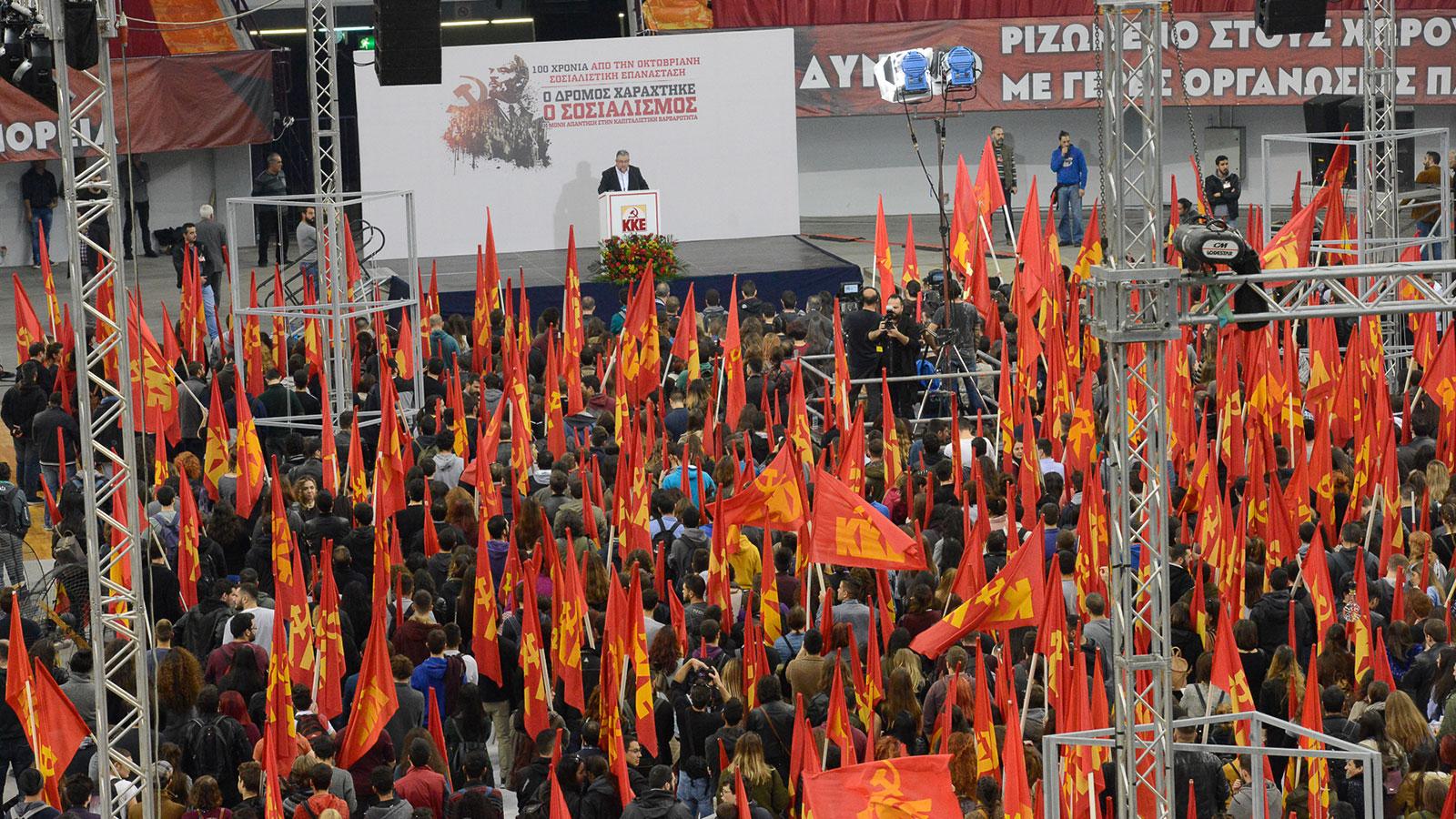 D.Koutsoumbas in his speech made reference to the imperialist interventions and wars that are breaking out today and maintained that: “October practically confirmed that the struggle for the exit of the imperialist war is inextricably connected with the struggle for worker’s power, and this strategy of the Bolsheviks was confirmed 100 years ago. That is the experience that we want to discuss, particularly today that the contradictions, the antagonisms, among powerful forces of the international capitalist establishment passes through our region: the Balkans, the Aegean Sea, the Eastern Mediterranean Sea. In the focus of the antagonism there are the routes of transport of energy and commodities between monopoly groups of powerful imperialist states, regarding which will prevail in the share that is already developing in our country. We have already told that the Greek bourgeois class, through the SYRIZA-ANEL government, is claiming share, selling the new dangerous “great idea”, of the so-called “geostrategical upgrading of the country” in the context of NATO. We warn: It is only an upgrade of the geostrategical implication of the Greek ruling class in wars and interventions in the area, in missions of Greek troops out of the national borders, in upgrading the US death-dealing bases, including the ones that host nuclear weapons. And this is what the SYRIZA-ANEL government sold during the recent visit of Tsipras in the USA, apart from praises for Trump.”

The SG of the CC called “our people to not take position “under foreign banners”, to not shed its blood for foreign interests.” and added: “In the case of a more direct participation of Greece in an imperialist war, the working class should chart its own struggle along with the popular strata and their movement, in order to defend the territorial integrity of the country and in order for the people to win against the bourgeois power of exploitation and of wars or of the so-called peace with the peoples’ at gun-point.” 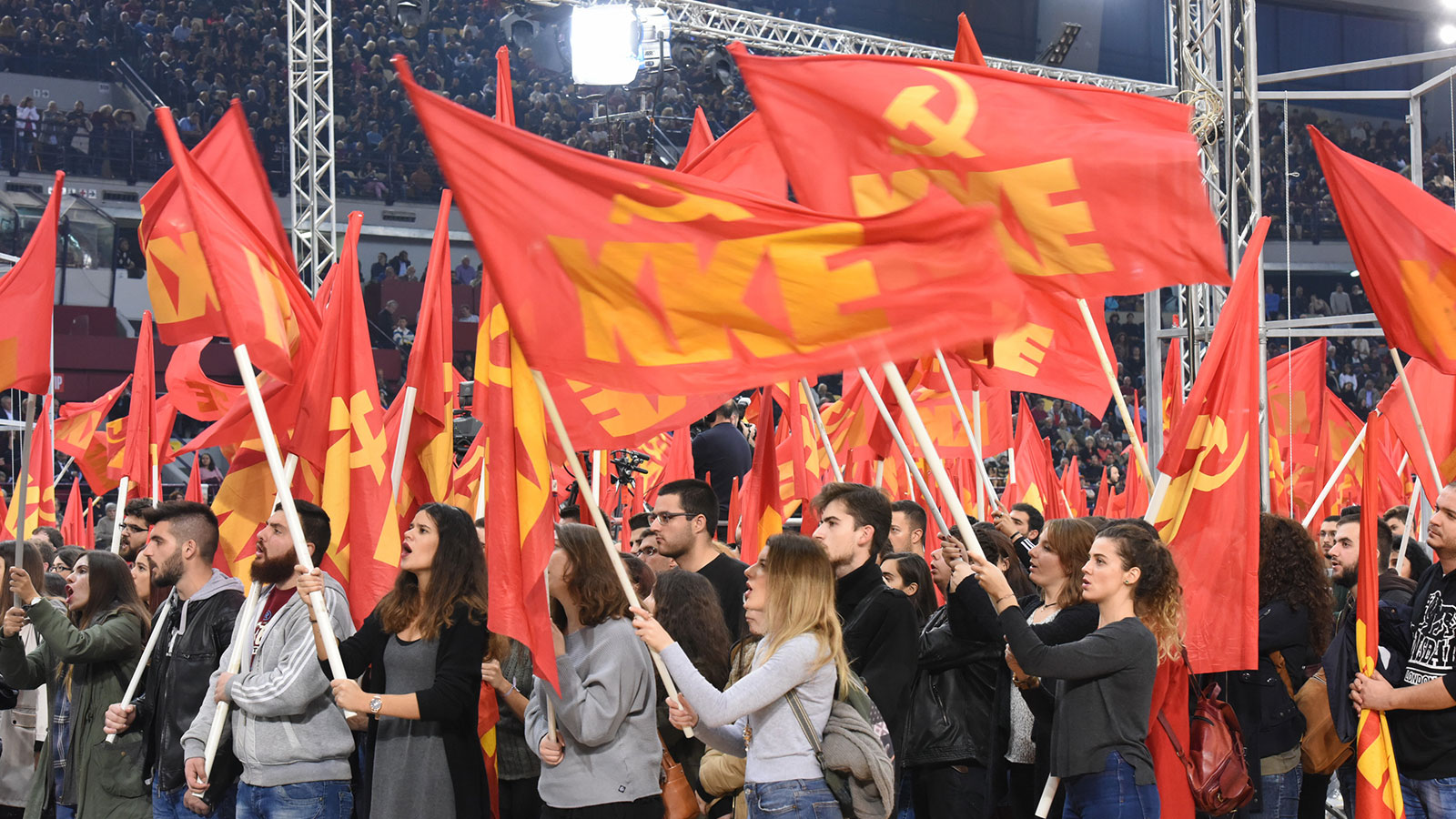 D. Koutsoumbas highlighted the achievements of socialism and made extensive reference to them undelining that “Socialism in the 20th century proved its superiority in comparison with capitalism, the immense advantages that provides for the work and the life of the workers. The Soviet Union and the international socialist system comprised the only true counter-weight to imperialist aggression.” Talking about the advantages of socialism he noted that “All the economic tools come under the service of the people. The mineral wealth, the infrastructure and machinery of industry, energy, telecommunications, transports, commerce, land, industrialized agricultural and livestock production become social property. The natural wealth producing resources become social property, the commerce becomes state-owned. With these tools the new power can plan centrally its economy, galvanize the development of the sectors of economy, of the peripheries. That is exactly why it can absorb all the unemployed, can guarantee the right to work. To abolish economic activity in health-care and prevention, to develop an exclusively free and public system of health-care-prevention, to develop people’s culture and sports. In can develop agricultural production next to the socialized sector of economy, organizing firstly a transitional form of productive cooperatives, provide the people with enough healthy food products and provide industry with raw materials. It can shape the conditions to expunge the causes of women's inequality and support the relations between the two genders with complete infrastructures, their willingness to form a family, without any economic motive, protecting motherhood, the children, the elderly. The workers’ power, disentangling our country form the shackles of EU and NATO, will intend to develop interstate relations with mutual benefit, among Greece and other countries, particularly with countries that their level of development, the nature of their problems and of their immediate interests can guarantee such a beneficial cooperation. The working class of Greece is not alone. It has and will have the workers of the whole world at its side. Our slogan is “Proletarians of all countries, Unite!”

The SG of the CC of the KKE, expressing the steadfast conviction of the Communists of Greece noted that “The era of socialist revolutions is ahead of us. The dashing entry of the working class and popular forces in the revolutionary struggle will sweep away sooner or later capitalist barbarism, imperialism aggressiveness. October illuminates the struggle of the peoples, socialism is a necessity of our times”.