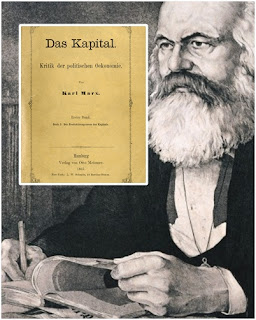 On the occasion of the 150 years since the publication of "Das Kapital" (The Capital)- the most significant book for the world's working class- we remember some basic thoughts written by Karl Marx.

The commodity is first of all, an external object, a thing which through its qualities satisfies human needs of whatever kind. The nature of these needs, whether they arise, for example, from the stomach, or the imagination, makes no difference. Nor does it matter here how the thing satisfies man's need, whether directly as a means of subsistence, i.e. an object of consumption, or indirectly as a means of production

Every commodity is compelled to chose some other commodity for its equivalent.

The whole mystery of commodities, all the magic and necromancy that surrounds the products of labor as long as they take the form of commodities, vanishes therefore, so soon as we come to other forms of production.

A commodity appears, at first sight, a very trivial thing, and easily understood.Its analysis shows that it is, in reality, a very queer thing, abounding in metaphysical subtleties and theological niceties.

The religious world is but the reflex of the real world.

Money is a crystal formed of necessity in the course of the exchanges, whereby different products of labour are practically equated to one another and thus by practice converted into commodities.

Capital is money, capital is commodities. … By virtue of it being value, it has acquired the occult ability to add value to itself. It brings forth living offspring, or, at the least, lays golden eggs.

As capitalist, he is only capital personified. His soul is the soul of capital. But capital has one single life impulse, the tendency to create value and surplus-value, to make its constant factor, the means of production, absorb the greatest possible amount of surplus-labour. Capital is dead labor,that vampire-like, only lives by sucking living labor, and lives the more, the more labor it sucks.

If this labourer were in possession of his own means of production, and was satisfied to live as a labourer, he need not work beyond beyond the time necessary for the reproduction of his means of subsistence, say 8 hours a day.

Unlimited exploitation of cheap labour-power is the sole foundation of their power to compete.

Capitalist production, therefore, develops technology, and the combining together of various processes into a social whole, only by sapping the original sources of all wealth — the soil and the labourer.

In capitalist society spare time is acquired for one class by converting the whole life-time of the masses into labour-time.

One capitalist always kills many.

The monopoly of capital becomes a fetter upon the mode of production, which has sprung up and flourished along with, and under it. Centralisation of the means of production and socialisation of labour at last reach a point where they become incompatible with their capitalist integument. This integument is burst asunder. The knell of capitalist private property sounds. The expropriators are expropriated.

But simultaneously with the development of capitalist production the credit system also develops. The money-capital which the capitalist cannot as yet employ in his own business is employed by others, who pay him interest for its use.

Since property here exists in the form of stock, its movement and transfer become purely a result of gambling on the stock exchange, where the little fish are swallowed by the sharks and the lambs by the stock exchange wolves.

"Just as the savage must wrestle with Nature to satisfy his wants, to maintain and reproduce life, so must civilised man, and he must do so in all social formations and under all possible modes of production. With his development this realm of physical necessity expands as a result of his wants; but, at the same time, the forces of production which satisfy these wants also increase. Freedom in this field can only consist in socialised man, the associated producers, rationally regulating their interchange with Nature, bringing it under their common control, instead of being ruled by it as by the blind forces of Nature; and achieving this with the least expenditure of energy and under conditions most favourable to, and worthy of, their human nature. But it nonetheless still remains a realm of necessity. Beyond it begins that development of human energy which is an end in itself, the true realm of freedom, which, however, can blossom forth only with this realm of necessity as its basis. The shortening of the working-day is its basic prerequisite".
- Vol. III.