KKE: Message of solidarity with the New Communist Party of Yugoslavia (NKPJ) 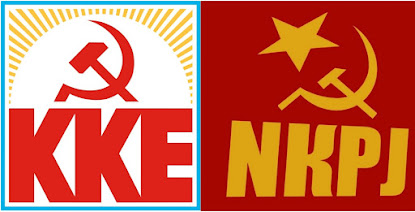 "The KKE denounces the cowardly attack by fascist groups against the offices of the Central Committee of the New Communist Party of Yugoslavia ( NKPJ) in Belgrade.

The fact that this is the fifth time in the past year that the headquarters of the CC of the NKPJ has been the target of an attack by fascist groups, without any action been taken by the authorities, demonstrates the provocative tolerance or even support that these groups enjoy from the competent security authorities of the country.

It seems that they are bothered by the activity of the NKPJ, which acts in defence of the interests of the working class and the other popular strata of the country, against the imperialist unions of NATO and the EU, and for the promotion of socialism as the only true alternative for the working people.

The Serbian government bears heavy responsibility for emboldening fascist criminals, since it has proceeded to the rehabilitation of thousands of Nazi collaborators. This policy is also being pursued with the support of the EU, which has become a flag bearer of anti-communism, the rewriting of history, the dissemination of the unacceptable theory of the “two extremes” and so-called totalitarianism.

The KKE expresses its solidarity with the NKPJ and the Communist Youth Union of Yugoslavia (SKOJ).

It demands that the government in Serbia take immediate measures to protect the headquarters of the CC of the NKPJ as well as to arrest and punish the fascist elements responsible for the attacks on the offices of the NKPJ".