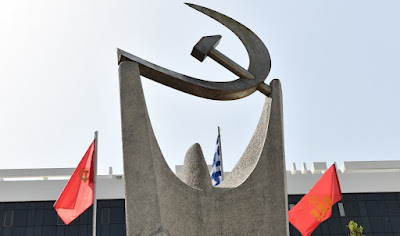 This campaign, which has the “stamp” of the EU and its governments, is served under the pretext of the “fight against totalitarianism” and the unhistorical equation of communism with fascism and aims at the consciences of the new generation. It wants to erase the heroic contribution of the Soviet people and the Red Army in the destruction of the fascist monster which was born and bred by capitalism.

The new intensification of this attempt utilizes the imperialist war between the Euro-atlantic powers and Russia in Ukraine and tries to equate the unacceptable Russian invasion in Ukraine and the attitude of capitalist Russia, which resulted from counterrevolution, with the Soviet Union and the glorious anti-fascist Victory.

The KKE denounces the Latvian authorities for the destruction of the anti-fascist monument and expresses its solidarity with those who are fighting against the prevalence of anti-communism and anti-Sovietism.

The Red Army's antifascist Victory cannot be erased! Hands off the anti-fascist monuments of Europe.”