“We are here in Paris to culminate the rich program of tributes, events, publications and other activities through which our Party honors the heroic Paris Commune, 150 years since the first “storming of dream” by the working class. We are here, we walked in the footsteps of the Commune and drawing strength and knowledge from its teachings, we continue the beautiful but difficult struggle. So that dreams will be vindicated”, said Dimitris Koutsoumbas, General Secretary of the CC of the KKE, during a speech in Paris, France.
“So that the working class will be able to complete what the Communards started, what the Bolsheviks continued almost half a century later, what is today more necessary and relevant than ever: The construction of a society free from the shackles of capital and its power. We are here because, as the Communard poet of the International Eugène Pottier wrote “the Commune is always alive!””, Koutsoumbas stressed out (read here the speech in Greek).
The General Secretary of the KKE delivered a speech at a political event in honor of the 1871 Commune at AGECA Paris on Saturday afternoon. The event, titled "Paris Commune 1871: The glorious harbinger of a new society - Legacies for the modern, revolutionary workers movement", was also attended by representatives of the communist movement in France, including the Pole of Communist Revival in France (PRCF), Revolutionary Communist Party of France (PCRF) and others.

He pointed out that the KKE does simply honor the great struggle of the Paris Communards merely as a historic event, but also as a source of knowledge and inspiration for the current and future struggles, as well as a source of important lessons”.

Dimitris Koutsoumbas said that “despite the huge- historically temporary – setback that we experienced with the lowering of the Red Flag from the Kremlin with the overthrow of socialism that was attempted, the people have not yet said their last word”.

Among other things, the leader of the Communist Party of Greece underlined that one of the great lessons of the Commune “is that the occupation of the “existing state capitalist machine” by the working class is not enough, but what is needed is its fundamental restructure and the crushing of all its old rotten structures”.

He added that this very significant conclusion “was confirmed by the victorious outcome of the October Revolution, as well as by the other socialist revolutions in the 20th century”, but also from the “negative experience of the consequences for the workers-popular movement when this victorious strategy ceased – in many cases during the 20th and 21st century – to be the stable compass of the International Communist Movement”. As he explained, many Communist Parties formed a strategically important conception of the possibility of transition to socialism “through partial reforms that will be made by a coalition government between communists, socialists, social democrats, even some liberal bourgeois parties”.

“This is a strategic concept that wasn't confirmed anywhere”, Koutsoumbas said.

This experience is very important today as well, when the social democratic and opportunist proposal – about a supposed “progressive” government within the framework of capitalism – returns. Koutsoumbas underlined the responsible stance of the KKE which denied any participation, support or tolerance towards the bourgeois anti-people government of SYRIZA. “A stance that consists a timeless legacy for the workers-popular movement and its development”, the General Secretary added. 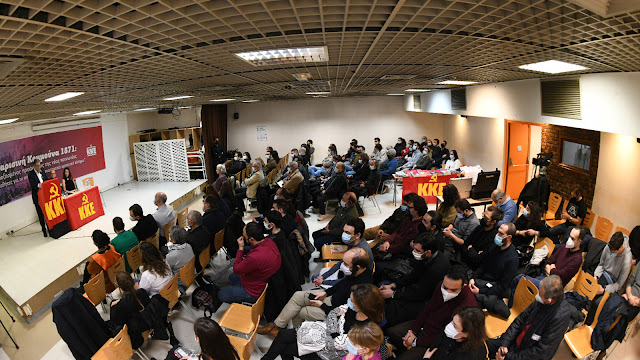 “We continue, with clarity and consistency, to insist explaining that the only condition for the KKE to be in the government is when people themselves, the working class, come to power, with social ownership of the means of production, central scientific planning, to begin the construction of a new society, socialism”, said Dimitris Koutsoumbas adding that “there is no other solution, no other way out”.

The corrupt capitalist system can only be overthrown, it cannot be humanized by words about “progress and democracy”, by invoking a “progressive government”, stressed out the General Secretary of the KKE.

In his speech, Dimitris Koutsoumbas also pointed out: “The system can and must change, only from the positions of the intensification of the class struggle, of the anti-monopoly, anti-capitalist workers'-popular struggle and alliance of the social forces that have an interest by this development, that have an interest by the new society”. Referring to the experience of the October Revolution he highlighted how significant is the existence of a Communist Party “with an elaborated revolutionary strategy and Program that ensures the creative development of revolutionary theory, always based on its fundamental principles”.

The General Secretary called the working people of Greece, as well as the Greeks who live and work in France, to join the struggle with the KKE. “In the struggle for a society worthy of the possibilities and necessities of our times. A society that will be commanded by those who produce the wealth and not by those who reap the results of the work of the many”, he said.

“So that the struggle for a truly hopeful way out for today and tomorrow will be strengthened. For the uprisings of our future, for socialims! Proletarians of all countries unite! Long live the Commune! Long live the KKE!”, stressed out Koutsoumbas in the conclusion of his speech.