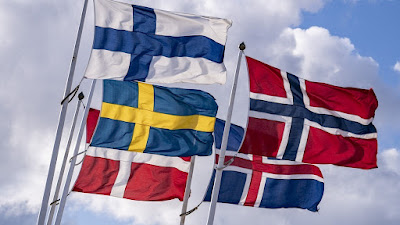 There is not much to object on Sjöstedt and Dragstedt's description of capitalism. Capitalism creates inequality, undermines democracy and threats our future on the planet. Our situation is characterized by high home loans and increasingly insecure employment. It is an unsustainable system.

Many can agree in the critique of capitalism. It's not necessarily that difficult for those who look at the world with open eyes and can see the injustices. However, when it comes to socialism our paths separate.

Is the welfare state a “socialist state”?

Not only in Sweden but in many parts of the world, Swedish welfare is regarded an example of socialism. Sweden is an inspiration for oppressed and exploited people around the world and the country is presented as an example that another world is possible, just as Sjöstedt and  Dragstedt write.

We do not have to travel anywhere to study how socialism works, but joint property and welfare, excluded from the notion of capitalism, give us enough material to study at home. This is the basis of their argument and it leads to mistakes. It is both a dangerous and illusionary basis.

The history of welfare is a story of class struggle. It is a story of a well-organized workers' movement that fought, sacrificed and came out victorious. It is the history of a socialism – whatever one thinks about its merits and disadvantages – that existed on the other side of the Baltic Sea and which forced the large Swedish companies to a certain restraint, making them to accept certain demands.

But welfare is also a story of capitalism. Concerning how capitalism also needed welfare.

When the public housing project – which is known as “the million programme” - was created, it wasn't done out of concern for the poor workers. The construction was carried out by private companies and gave the necessary boost to Skanska (construction company) to become a really big firm. The million programme also succeeded to concentrate the workforce in the existing industrial centers, something that was an important aspect of the consequent industrial policy.

When the unitary school was introduced, it wasn't done out of concern for the students' education. The development of the workers is a prerequisite for the development of the machines. Therefore, training became necessary based on the needs of large companies. “If the brooms are to sweep well, you must not skimp on the sticks”, as Gunder Hägg was singing.

When healthcare was upgraded, it wasn't done out of concern for the people. The workforce must be reproduced both long and short term. In simple words: A worker who is “damaged” has to be repaired.

That bourgeois perspective can be applied to every aspect of welfare, but the point I want to make is none other than the fact that welfare under capitalism is a capitalist welfare. It is limited, circumvented and far from sufficient – to call it as “socialist” misses the potential that socialism has in the development of welfare.

On this matter Sjöstedt and  Dragstedt follow two different cases: On one hand they refer to employee-owned companies and cooperatives and, on the other hand to state ownership, which they regard as synonymous with socialist ownership.

Are employee-owned companies and cooperatives socialist? Do they offer an alternative to the private system of capitalism?

For the individual worker who is in the cooperative, it can certainly relieve some pressure and there can be advantages in the form of operation. Nonetheless one fact remains and that is that every cooperative operates within a market and is subject of the market laws. In order to exist it has to be competitive in the capitalist market with all that this implies. This issue raises a problem that Sjöstedt and Dragstedt do not address: the problem is not the individual companies but the market itself, that means the system itself.

But what about the state then?

The state undertakes a number of welfare tasks that do not correspond, to any extent, to the need of private capital. We are dealing with lubrication in machinery – the major task of the state is to ensure that everything runs smoothly. Or rather, as good as needed. Historically, the state has been active in sectors where there was not sufficient profit for the private companies or where an overview was required which the private companies have not been able to obtain.
I'm now thinking of the railways, which were absolutely necessary for the transportation of goods. I'm thinking of welfare which was absolutely necessary, among other things, for the reproduction of labor. I'm thinking of the mining industry which was absolutely necessary for private industry.

Within this context it less important whether or not these companies are profitable. At least for the state, welfare is not profitable. Here are included the costs that are necessary and which are paid through taxation by the working people. However, as Sjöstedt and Dragstedt  point out, there are sufficient state companies that bring money to the state. That money – this is important to stress out – come from an efficient capitalist activity both in Sweden and abroad and is used in practice to release money for the private capital.

How does it happen? The money that the state itself can generate is money that private capital does not have to spend for the reproduction of labor. Instead, that money become profits.

The point is simple: the state ensure that the system works. It has nothing to do with socialism in itself and common ownership is common only for capitalism, not for ordinary people.

If we are to move forward we must make clear what our goal is. We must study our history, both the history of Nordic countries as well as the history of socialism. If we want to do it, we must have a clear perception of the basic ideas, without confusing apples and pears.

The discussion that Sjöstedt and Dragstedt started is welcome, but those who are looking for answers concerning what happened and which way leads forward will be disappointed, because it (this discussion) leads nowhere. At most, it leads back to the struggle for a little better capitalism.