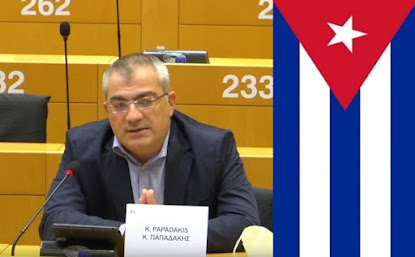 Once again, the European Union and its mechanisms play a leading role in promotin counterrevolutionary “voices” against Cuba. This time, the anti-Cuban show was staged at the EU Parliament's Subcommittee on Human Rights (DROI) under the mantle of “activism” and with the known pretexts of “democracy” and “human rights”.

In his intervention, the Communist Party of Greece (KKE) MEP Kostas Papadakis strongly denounced the anti-communist provocations against Cuba. More specifically, the KKE eurodeputy said:
“Recently, an orchestrated intervention plan has been evolving from the USA, the anti-Cuban mafia, as well as from a few internal forces. With provocations and a propaganda mechanism in the media, the social media, websites, “influencers” and NGOs that are lavishly fed by the CIA and its various networks, aim to create conditions of chaos in Cuba.

In the same direction are the supposed “sensitivities” and intentional campaigns of both the European Union and the European Parliament.

Of course, in your selective sensitivities there is no place for the criminal blockade that deprives the Cuban people of vital needs and rights for decades, at a time when the Biden administration is strengthening the 243 additional sanctions that had been previously imposed by the Trump government.

The provocations and machinations will backfire on their instigators. We express our full solidarity to the Cuban people, the government and the Communist Party of Cuba, in the struggle of the Cuban people to defend the achievements of their revolution”.

In Greece, statements against the EU Parliament's anti-Cuban machinations were issued by the All-Workers Militant Front (PAME), the Greek Committee for International Detente and Peace (EEDYE) and the Greek-Cuban Association of Friendship and Solidarity of Thessaloniki.