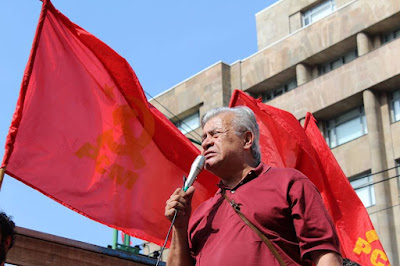 He was at the forefront of important student, peasant and popular struggles in the 1970s. He was a local Deputy of the state of Veracruz and Federal Deputy of the LIV Legislature (1988-1991), from where he opposed privatizations and structural adjustment policies against workers.

He stood out for his link with the port workers of Tampico and Veracruz, and in the last 20 years he stood out for his activity in defense of lands, territories and nature, confronting the mining-energy monopolies and the Federal Government.

Héctor Colío Galindo was among the main promoters of the reorganization of the Communist Party of Mexico from November 20, 1994, being part of the Central Committee from then until today, fulfilling his responsibilities with great conscience and optimism. As a communist cadre, he was trained in the cadre schools of the PSUA in the German Democratic Republic.

It was characterized by a firm defense of Marxism-Leninism and against the opportunist deviations that the Party suffered at times. He led the fight so that in the 2001 Congress the Party would recover democratic centralism as an organizing principle and the dictatorship of the proletariat as a basic programmatic objective. His consequent action contributed to the forging of the communist identity of the PCM in its reorganization process.