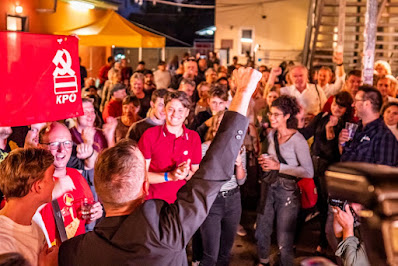 Communist candidate Elke Kahr told reporters that the magnitude of the municipal election result was "more than surprising".  "Some people make promises a few weeks before the elections. We are there every day and for years for the people, especially for the poorest," she said.

With more than 220,000 voters, the city of Graz has often voted in favor of the KPÖ, despite their lack of support in the rest of the country. In the last federal elections in 2019, the party won fewer than 1% of the vote.

The Communist Party of Austria (KPÖ) is affiliated to the "Party of the European Left", the political alliance which includes social democratic and opportunist forces, like Greece's SYRIZA, Germany's Die Linke and Spain's United Left.

KPÖ has received strong, but justified, political critique by the Austrian Party of Labour (PdA) which was formed in 2013 by a Marxist-Leninist breakaway faction of the KPÖ who disagreed with the party's opportunist turn.

In an article published in Zeitung der Arbeit, the Chairman of PdA Tibor Zenker points out that the KPÖ in Graz followed in the footsteps of the - once powerful - Social Democratic Party (SPÖ), posing as a "alternative social democracy".

Among others, Zenker points out that the KPÖ "is not a Marxist-Leninist party" and that concepts such as "class struggle, socialist revolution and communism" are included neither in the rhetoric, nor in the activities, of the KPÖ.

"The task of the KPÖ Graz now is to organize the administration of capitalism in leading government responsibility in the second largest city in Austria; the task of the PdA is still to build a nationwide and internationally networked revolutionary fighting organization for the overthrow of capitalism", concludes the Chairman of the Party of Labour.