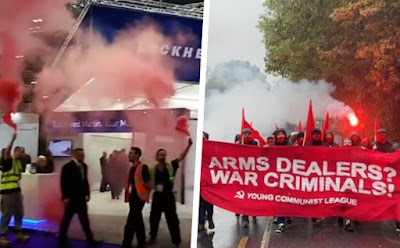 A man who appeared to be a security guard talks to the men as one of them shouts against 'British imperialism'.

In a statement posted online, the group said it usually boycotts the event but decided to 'protest and disrupt' the fair this year. It calls on supporters to 'fight back' and fight against the security industry across the world.

"We are a group of workers who have decided to take action against the DSEI arms fair, where Western-aligned regimes shop for weapons to oppress and murder our sisters and brothers across the world.

Every year DSEI struggles to get workers to build and run their sick event as every year we enforce an informal boycott as stagehands and events crew organised in unions and informal networks.

This year we have decided the boycott was not enough. When the offers of work at DSEI started coming in we decided to protest and disrupt the event from the inside and make some small contribution to the fight against the arms and 'security' industry that drives war and occupation for the profits of rich parasites safely back home in America and Europe.

We call on all fellow workers in all industries who are asked to support war, climate change or anti-working class projects to rebel and do as much damage to those companies and shareholders who want to damage us.

They have the money - but we have the numbers. Fight back with whatever you have to hand".