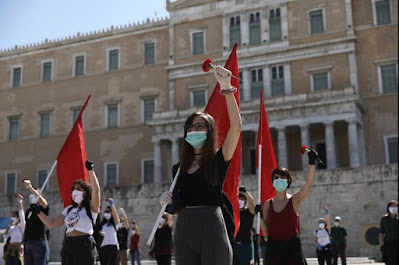 “…Because for me,the most surprising,
the most imposing, the most mysterious and grandiose
Is a man not allowed to walk;
A man who’s being shackled”

With the “demonstrations’ management” plan, the Greek government is running to prevent the popular anger and outrage that is piling up and growing.
Their plans will be answered on the streets! They will be answered by the militant organization of the struggle in the industries and workplaces.

The Government which reduces funding on Public Hospitals in the midst of the pandemic, but gives “land and water” to business groups, the government that has no money for doctors and teachers, but has financial support grants for airlines, hoteliers and ship-owners, for “special security forces” and police, comes to confirm that the visible enemy of workers is the system that breeds poverty, unemployment, exploitation, repression and oppression!

The Government’s plan confirms that in the face of the profitability of business groups, the democratic rights and freedoms of the people to fight and demand are sacrificed.

— The profiling of any trade union leader or worker who organizes a mobilization. Every rally will require a certificate of the “organizer” from IRS so that with new fines and to lead the unions and every fight to financial ruin. Especially after the countless examples of the corona-fines for trade unionists, strikers, workers who worked overtime even blooddonors!
— While at the same time the conditions are created to accuse the unions and every militant mobilization, for actions and acts that have nothing to do with the movement, even the action of dark mechanisms and provocateurs.
—  They bring to Greece the French Law of “Universal Security” which opens the path for general silencing and vertical censorship against any media or voice that questions, records and reveals the brutality of the repressive forces. Since Greek Police is given the opportunity to intervene in what will be shown in the media, but also in what, how and where it can be recorded by the media under the pretext of “unhindered conduct of police operations”.
— They will proceed with police checks on persons and cars, even far away from the place of protests, which is essentially general intimidation against anyone who intends to participate in a protest.

While maintaining and cultivating the reactionary and dangerous notion that workers’ and people’s demands, mobilizations and demonstrations are field of criminal activities, they target thepeoples as the enemy and aim to block the workers-popular movement!

Workers’ struggles will not be stopped. Trade union action and the struggles for the life and survival of the working class are not forbidden by laws!

Not repression and police!

Repression, state intimidation and authoritarianism will not pass!

We are strengthening the fight for the health, life and rights of the people!

Law is the right of the workers!
pamehellas.gr