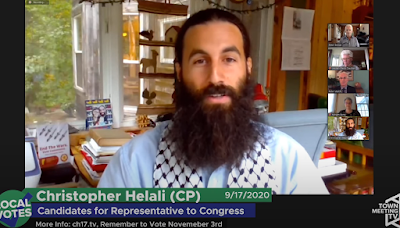 "Capitalism has failed the working class, it has failed workers and farmers in Vermont and around the United States. What we need to do: We need to end the wars, we need to close all the foreign military bases, we need to abolish NATO, we need to nationalize all major industries and seize the means of productions for the people. We need free healthcare, free childcare and free education from pre-k to doctoral level.

We need to end the sanctions, the illegal and immoral sanctions against Iran, Venezuela, Cuba, Zimbabwe, the DPRK and all the other countries that we put a boot on around the world. I say no to a new cold between us and Russia and China. The same people who led us into the war in Iraq are now pushing the anti-China hysteria, the anti-Russia hysteria, all of these things. We need to end support for the apartheid state of Israel and we need a free Palestine.

I believe now more than ever that the working class must rise up, must throw away these parties of capitalism and war and abolish the system we have and create a new one, for workers' democracy."

You can watch the full discussion on the following link: https://youtu.be/ziLtjPyXBWc

Clip from the most recent election forum our candidate Helali attended. pic.twitter.com/UiBi9wQ3RO

Clip from the most recent election forum our candidate Helali attended. pic.twitter.com/BUueO9vlfM

Clip from the most recent election forum our candidate Helali attended. pic.twitter.com/smnMNMTWWs

Clip from the most recent election forum our candidate Helali attended. pic.twitter.com/YQ61HHLv1q

Clip from the most recent election forum our candidate Helali attended. pic.twitter.com/9kzLXOiC73