Marx Memorial Library — an oasis of education, ideas and history in the heart of London

“We are actually in an oasis, here in the heart of London, an oasis of knowledge, education, learning, ideas, history, memory about issues which mainly the young generation, the working class in general, in Britain, Europe and the whole world, must learn. Because the ideas of Marx, Lenin, Engels, of all the great revolutionaries of humanity, are alive and relevant. They are relevant today, until we reach the overthrow of the rotten capitalist system and build a new, really socialist society”.

The above statement was made by Dimitris Koutsoumbas, General Secretary of the Communist Party of Greece (KKE), after his visit at the Marx Memorial Library on Friday, January 10th.


The Marx Memorial Library & Workers' School was founded in 1933 on the 50th anniversary of the death of Karl Marx. Since its establishment, the Library has been the intellectual home of generations of scholars interested in studying Marx and Marxism.

The area of Clerkenwell Green, where the Library is located, has long being a home to radical printers and publishers, acquiring the fame of London's radical and militant neighborhood.

Vladimir Lenin worked in the building from 1902 to 1903, where he edited the Russian revolutionary periodical “Iskra” (The Spark), which was then smuggled into Russia.

The Library is home to an impressive number and variety of archives and collections (over 60,000 books, pamphlets and periodicals) including the full run of the Daily Worker and Morning Star, the International Brigade Archive, Bernal Peace Library, Klugmann Collection and an extensive Photograph Library. 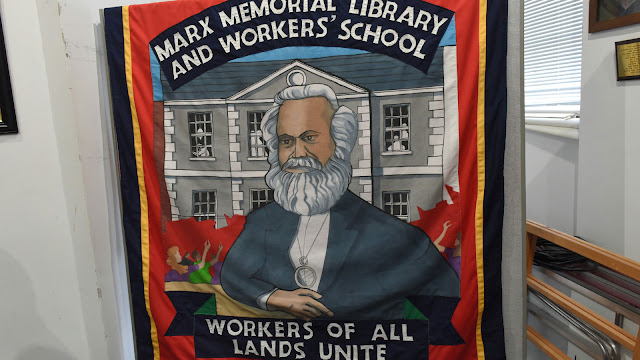 On the 24th September 2019, the Marx Memorial Library suffered a devastating flood which caused significant problems with the buildings flat roof and drainage system. Although further damage was avoided, the incident has given impetus to an urgent programme of works that include the enhance of protection of the Library's most vulnerable archives. For that reason the Marx Memorial Library asks from anyone who is interested to contribute in this time of need. For more information click on the following link: http://www.marx-memorial-library.org.uk/civicrm/contribute/transact?reset=1&id=19