ALL PEACE FORCES MUST BE UNITED AGAINST ANGLO-AMERICAN IMPERIALISM: STOP ALL ILLEGAL ‘ACTS OF WAR’ NOW!

“Make no mistake. Britain is “on the same page” as the US government whose extrajudicial killing of Iranian general Qasem Soleimani and a host of others has brought the world to the brink of war.

The British ruling class is “on the same page” as a US President who publicly declares he intends to target Iranian “cultural sites,” despite this being a war crime under the Hague Convention and one unanimously condemned by the UN security council just three years ago in response to the widespread destruction of ancient monuments by the Isis terror group, that Iran was fighting hard to defeat.

British imperialists are “on the same page” as Washington’s military despite killing Soleimani on Iraqi territory being a shameless breach of its supposed alliance with Baghdad — one which has prompted Iraq’s parliament to demand the immediate withdrawal of all US troops from its country. There is clearly a collaborative imperialist effort to smother Iranisn influence in the Middle East region.

Dominic Raab claims to want to avoid a war.  For that matter so does Donald Trump, who ludicrously asserts that he ordered Soleimani’s killing to stop one. But the uproar sweeping the Middle East in the wake of this outrageous breach of international law will be difficult to contain.

It is true that Iran put down popular protests with great fervor; but the arbitrary murder of one of its most senior military officers is clearly sparking popular fury on the streets of Iran's great cities.

Mass protest movements in Lebanon and Iraq, which were indeed opposed to Iranian influence associated with their governments, will now find their democratic struggle faces threats of subversion in the interests of the intriguing imperialist powers.

International pressure for de-escalation is vital and the complete mobilization of U.S. peace forces is essential if a new Middle Eastern war likely to take millions of lives and ruin millions more is to be avoided.

Trump’s reckless action puts our entire world in danger as well an escalation the whole world can see comes from the White House and nowhere else, the same White House that tore up the nuclear deal and shredded landmark arms limitation treaties with Russia that signaled an end to the cold war, the same White House that has been trying for a year to impose an unelected puppet as president of Venezuela and which stood behind the brutal military takeover in Bolivia last month.

In short, the same White House that is the biggest threat to peace and security on the planet, including in its role as denier-in-chief of the climate change catastrophe we are now seeing unfolding in Australia on an apocalyptic scale.

While a number of Democratic Party leadership hopefuls cautiously distance themselves from Trump's illegal war plans, it is obvious to everyone watching that the Democrats are complicit in this imperialist push toward war. It is our duty as patriotic Americans to stop this action from going any further. As over 80 demonstrations against war in the US alone this weekend demonstrate, the world agrees. No war on Iran.

COMMUNIST PARTY SAYS "NO" TO TRUMP WAR WITH IRAN 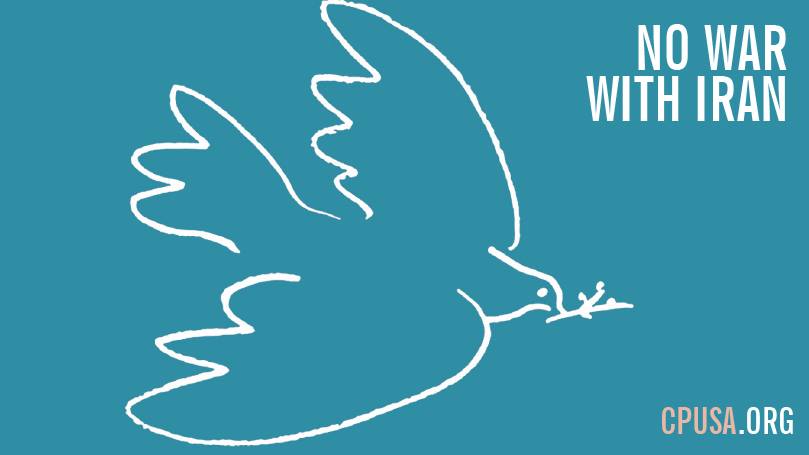 With the assassination of the head of the Iranian Revolutionary Guards Corp, General Quassem Suleimani, and the commander of an Iraqi militia group, Abu Mahdi al Muhandis, by a U.S. drone attack in Iraq, the danger of a full-scale war between the United States and Iran, and a general regional war in the Middle East has been greatly increased.

At the same time, the national sovereignty of Iraq has been violently assaulted by the Trump administration, while the U.S. Constitution, which reserves to Congress the exclusive right to declare war, is yet again undermined.

The Trump administration has justified the new attacks on Iraq and the likelihood of a war with Iran on the basis of a series of dubious claims about Iranian plans to strike U.S. targets, and is now moving thousands of new troops into the region.  Forgotten is Trump’s 2016 election demagogy about getting out of wars in the region. But we hope and expect that the people of the United States will not have forgotten how the lies of the Bush administration about “weapons of mass destruction” got us into Iraq in the first place, and will not swallow the latest pretexts for violent escalation.

This latest action comes on top of a whole series of moves by Trump and his government to escalate tensions in the Middle East:  The withdrawal of the United States from the Joint Comprehensive Plan of Action on Iran’s nuclear project, the return to unilateral sanctions by the United States, the announcement of the moving of the U.S. embassy to Israel from Tel Aviv to Jerusalem, the meddling in Syria, and the never ending horror of the Yemen civil war, to name just a few.

The U.S. intervention comes at a point, also, at which massive popular demonstrations in Iraq, demanding an end to corruption, have met with violent counter action.  The U.S. attacks may undercut the message of these protests.

The Iraqi Communist Party, the Tudeh (communist) Party of Iran, and other left wing and people’s organizations in the Middle East and beyond have denounced the U.S. attack, pointing out the danger that Iraq now be turned into a battleground in the conflict between the U.S. and Iran.  Fortunately, this time, in contrast to 2003, voices have been raised in Congress against it as well. Yet the Trump administration is likely to be undeterred unless the people of the United States speak out against the situation in our millions, and right away.

The Communist Party USA denounces the new aggressive and violent actions by the Trump administration, which are in flagrant violation of International and U.S. law,  and calls for:

*Solidarity with the working class people of both Iraq and Iran against imperialist attacks and anti-people sanctions,

*An end to intervention by the United States and its Saudi, Israeli and gulf allies in all countries of the Middle East,

*Support for international and peaceful approaches to the resolution of the problems of the area, including via the United Nations and its agencies,

*Clipping the wings of the military-industrial complex in the United States, and the redirection of the massive military budget to peaceful uses such as health care for all and the Green New Deal,

*Pressure on our members of Congress and other elected officials to oppose, in word and deed, the violent and dangerous foreign policy of the Trump administration,

*Support for demonstrations and other protests against the new U.S. attacks, and

*A full turn out in the 2020 national elections to achieve the removal from power of Donald Trump and his allies, as an essential element in the fight for world peace. The Communist Party of Canada condemns in the strongest terms, the illegal US airstrike and assassination of Iranian General Qassem Soleimani and 9 others, in Iraq on January 2nd.  The US strike and assassinations are illegal under the UN Charter, and are acts of war and US state terrorism which threaten to set off a regional war or even a global confrontation.  This is the road to Armageddon.

The US effort to justify its actions by claiming self-defence is as transparent as its infamous claim of “weapons of mass destruction” as justification for its 2003 invasion and occupation of Iraq.

Likewise, the current crisis involving the US and Iran was brought about by the US’ unilateral decision to put crippling sanctions on Iran and to pull of the Joint Comprehensive Plan of Action nuclear deal reached in 2015 between Iran and the P5+1 together with the European Union.

US imperialism thrives on aggression, tension, and war in the region, and in the world, as it seeks to strengthen its dominance over its imperialist rivals and over the sovereignty of the states, nations and peoples it subjugates.

The more immediate aim of yesterday’s airstrike and assassination, launched by the US President personally, was to invigorate the President’s flagging election fortunes with a dog-whistle pitch to a fake patriotism and a fascistic national chauvinism. This is a threat to the people of the world.

The Communist Party calls on the Canadian government and the Prime Minister to condemn these acts of war and terrorism by the US and the Trump administration and to speak out about the enormous threat they pose to peace and stability in the world, to national sovereignty and independence, to the continued existence of the United Nations and international law.

Canada has bowed to US pressure by agreeing to detain Meng Wanzhou for extradition to the US to be prosecuted for refusing to recognize illegal US extra-territorial laws and jurisdiction over other countries’ trade with Iran. There is no legal basis for her detention. But it is clear evidence of Canada’s changing relationship to US imperialism, and its near complete absorption into the vortex of NATO and the US war machine. Canada is now routinely involved in illegal US regime change operations, and in US dirty wars around the world including the 16 year old US-led war on Iraq which killed over one million Iraqis. Canada is now commanding the NATO mission in Iraq.

Canada must reverse course, exit NATO, leave Iraq, and stay out of Iran.

Instead of war and militarism, Canada must adopt an independent foreign policy of peace and disarmament; mutual security and respect for the sovereignty and independence of all states and nations, and commit to the resolution of international conflicts with political – not military – solutions. We call on the labour and democratic movements across Canada to speak up against these US war crimes, and to condemn the US drive to a new war in the Middle East. Public pressure on the Canadian government to oppose these illegal acts of war can help stop the outbreak of a new war, and all its consequences on the 100 million people who live in the region, and on the peoples of the world.