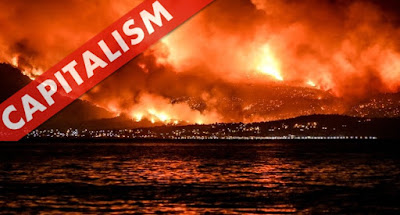 The SYRIZA-ANEL coalition government has unleashed an outrageous communicative campaign in order to throw the blame for the disaster somewhere else, except from itself. They blame the “weather”, the “climate change”, the supposedly “unprecedented weather conditions”, the “wind”, etc.
In an interview to the BBC, Defense Minister Panos Kammenos had the audacity to blame the residents themselves because, as he said, they contributed to disaster by building illegal homes. In a shameless effort to justify the unjustifiable, Prime Minister Alexis Tsipras talked about an “asymmetrical phenomenon”.

Behind such communicative tricks of mockery, which deceive and provoke the people, they are trying to hide the actual culprit of the tragedy: the barbaric capitalist system which generates the pursuit of profit. Profit-making is behind arson and land enroachment. A burnt forest consists a splendid opportunity for investment and profitability by capitalists and business groups. Capitalist development imposes- through one or another way- the concentration of land in fewer hands.

Once again Mr. Tsipras is lying to the Greek people. The wildfires aren't an “asymmetrical phenomenon”. What consists an asymmetrical phenomenon- which poses a continuous grave threat to the people- is capitalist system itself. This is the system that SYRIZA, New Democracy and the other bourgeois parties are serving.

Enought with lies and hypocrisy! The unspeakable disaster of the last days in the suburbs of Athens is nothing but the mirror of capitalist barbarity.