Deadly wildfires in Greece: PAME calls for immediate solidarity to those affected 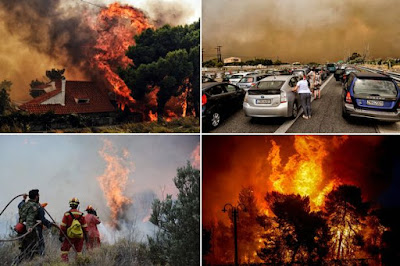 More than 50 people have died in wildfires burning in the Attica region around Athens, in Greece's worst fire crisis in more than a decade.
According to the local mayor, 26 bodies were found in a yard in the seaside village of Mati, which is at the centre of the disaster. The fire brigade confirmed an overall death toll of 49, with many of the dead believed to be young children. It is estimated that the number of deaths will grow by the end of the day.
Many calls have been made to the rescue services looking for missing persons. As part of a huge rescue effort, emergency workers used boats and helicopters to evacuate a beach.
In a statement the All-Workers Militant Front (PAME) "expresses its condolences to the families of people who have lost their lives, whose numbers are constantly increasing. We express our sympathy for the wounded and the victims of the fires.
Despite the titanic efforts of firefighters and volunteers who are fighting against the fires and for the evacuation of those stranded, it is obvious the lack of central planning, of coordination, the lack of measures for firefighting and of fire protection.
Those are issues that have been raised by the class trade union movement repeatedly and in a particularly intense way in the past as a priority for the protection of working people's life and unfortunately today their absence contributes decisively to the loss of human lives in an inconceivable tragedy.
The government must immediately take all necessary measures to meet the initial needs of those affected.
PAME will directly address on the causes and responsibilities, as well as for the relief of the people affected.
At the moment, priority is the help, the organization of substantial and immediate solidarity. PAME calls on the trade unions to immediately organize their practical solidarity with the inhabitants and those affected in the areas, and to contribute and help in any way alongside the fire-fighting forces."
Also, a group of members from the Communist Party of Greece, headed by Central Committee member Aleka Papariga, visited earlier today the affected areas where they talked to the local people, expressed their solidarity and had informative talks with the local authorities about the scale of the disaster.
IN DEFENSE OF COMMUNISM ©