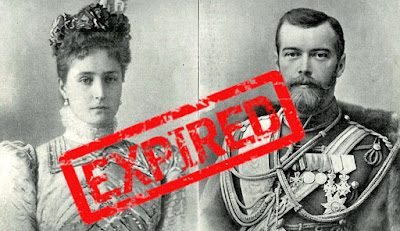 Around eight months later, on 17th July 1918, in the city of Yekaterinburg, the remaining members of the Romanov dynasty, the Tsar and his family, were executed by the armed hand of the Bolshevik revolution. Justice had been delivered and the Romanovs received what they actually deserved after centuries of tyranny against the Russian people.


The execution of Tsar Nicholas II and his family by the revolutionaries marked the end of a savage dynasty of megalomaniacs after 304 years. For more than three centuries, the people of Russia were living under a highly repressive, brutal and corrupted regime.

The reality behind Hollywood fairytales- like Disney's "Anastasia"- is extremely harsh. The dynasty of the Romanovs was marked by brutal violence, cultural regression, bigotry. The Tsar, his family and friends were living in immense wealth and luxury, while the vast majority of the people were starving.

After the counterrevolution in the Soviet Union in the beginning of the 1990s, the bourgeois historiography, in collaboration with the highly reactionary Russian Orthodox Church, has tried to "restore" the Romanov dynasty. In 1991, President Boris Yeltsin himself attended the- state funeral (!)- of the remains of some family members.

In 2000, the reactionary Russian Orthodox Church announced the canonization of the Romanov family, thus declaring "martyrs" a bunch of megalomaniac parasites who lived at the expense of the poor Russian masses. In another outrageously ridiculous decision on October 2008, the Supreme Court of the Russian Federation ruled that Tsar Nicholas II and his family were victims of political repression and rehabilitated them!

The bourgeois establishment of post-Soviet Russia, alongside the Orthodox Church, have made everything in order to rehabilitate the Romanovs. However, the historical reality is much different than the phony image of Romanov dynasty they want to present.

In 1918, the revolutionary forces of the Russian people threw the Romanovs where they truly belong- in the dustbin of History. This is the place where the bourgeois democracy and the reactionary forces will, sooner or later, end up.