Kemal Okuyan- Don’t you understand the difference between patriotism and nationalism? 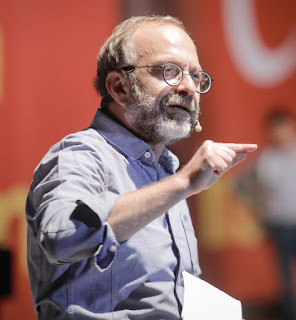 Kemal Okuyan, the General Secretary of the Communist Party of Turkey (TKP) and soL columnist, wrote an article on January 30 regarding the differences between patriotism and nationalism with reference to a famous patriotic Soviet song, 'Song of the Motherland', some lyrics of which were removed after the collapse of the Soviet Union in order to ignore the song's references to the equality of all people under socialism.

Don’t you understand the difference between patriotism and nationalism?

It was 1936. Racism and fascism were rising in Europe. Italy, Germany and Austria surrendered. The fascists declared a "holy war" against the republicans in Spain. Nationalism was polluting everywhere. Discrimination against the black people reached the highest level.

One of the most libertarian documents of the human history, the new Constitution was enacted in the same year in the Union of Soviet Socialist Republics.

Socialism bans racism and war propaganda, not to mention fascism.

Meanwhile, a song was written in the Soviet Union, which became highly popular. Composed by Isaac Dunaevsky and written by Lebedev-Kumach, the Song of the Motherland is an epic tribute, such a song that included the people’s pride and love of homeland, and the defense of homeland when necessary.

Wide is my Motherland,


Of her many forests, fields, and rivers!
I know of no other such country
Where a man can breathe so freely.

So the song begins and ends:

But our brows shall frown sternly


If an enemy attempts to break us.
As a bride, we love our Motherland,
We protect her, as a gentle mother.

It is 2018. The song is still chanted in Russia. In giant concert halls, rallying squares and official ceremonies, people stand up and movingly wave Russian flags with enthusiasm and unity against the external enemies imagining that how wide their homeland is with many forests, fields and rivers.

No sorrow even when income injustice in their country hits the peak in the world, even when homeless people freeze to death in the streets, even when university graduate women fall into prostitution. No matter, in any case, "our army defeats everyone"!

Some passages were removed from the song; so to speak, they were erased from the social memory after the Soviet Union collapsed in 1991.

What about the “unwanted” excerpts of the song?

For example… At our table, no one is excluded, / Each is awarded on merit,

For example… A person always has the right / To study, rest, and work.

No more… No more such lyrics are chanted. Wide forests, fields and rivers, and the resolution against the enemy. That is all!

That is to say, some feel disturbed about such a social project, the opinion of including everyone at the table in Russia today.

That is to say, some do not show tolerance towards people’s right to receive their reward for their efforts even in the songs.

That is to say, some do not want to hear people’s right to study, work and rest.

This song made its début in the film Circus, depicting how a white American woman’s black child was adopted by the socialist society.

Afterwards, black American singer Paul Robeson sang this song in Russian with a special emphasis on the song’s anti-racist part, telling the Americans, "An order was established, which does not exclude me because of my skin colour, but welcomes me as a black person."


To us is higher than all fine words.
With this word everywhere we feel at home.
Forus there are no “blacks” or "coloreds".
This word is familiar to everyone,
With it we always find friends.

This part is "sometimes" sung in today’s Russia.

That is to say, today’s Russia does not believe that much in the idea that every people are brothers and sisters, that no one should be exposed to discrimination on the basis of race and ethnic roots.

However, all these are far beyond and more than the proud of tanks, rifles and wide fields. In other words, people should boast of tanks and rifles only when they use them in order to defend humane values; if such values are protected in wide fields, people could boast of those fields.

Patriotism is the creation of advanced values, improving and defending those values, it is the love of homeland that produces or will produce the good and the beautiful.

The equality and fraternity of people are noble ideas. If these ideas become a social law in one’s country, then one can boast of his/her country; on the contrary, thinking that "I defend even my country’s mistakes and crimes" is a shallow, primitive and extremely dangerous approach.

Yes, this is the difference between nationalism and patriotism.

Nationalism means saying, "I can stay together with my thieves, my tyrants and my exploiters if required because they belong to me."

On the other hand, as we always say, patriotism means, "the will of purging the country of thieves, tyrants and exploiters, protecting the country’s forests, rivers and fields against pollution."

Everywhere and in Turkey.