Fidel Castro, ¡presente! Thousands gathered at the University of Havana to honour the Comandante 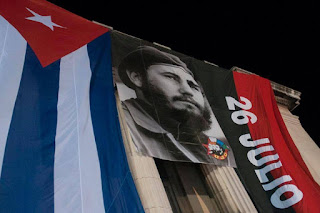 Thousands of people gathered at the University of Havana in order to pay their respect to Comadante Fidel Castro, on the one years since his death. Report from Granma International.

Once again the historic guerilla brought together a multitude of grateful youth. Once again he showed us the right way, with his index finger pointing to the future. In a cultural-political act at the University of Havana’s historic Grand Staircase – where he spoke to students on many occasions – the generation in which he placed all his trust, gathered one year after his passing, to show that Fidel has not left, and that today, he is more present than ever.

Accompanied by José Ramón Machado Ventura, second secretary of the Communist Party of Cuba Central Committee; Party Political Bureau members Miguel Díaz-Canel Bermúdez, first vice president of the Councils of State and Ministers of Cuba, and Mercedes López Acea, a Council of State vice president, the hearts of Cuba’s youth throbbed with every song sung that evening, and with the images recalling Fidel’s life-long connection with the new generations.

“I am Fidel,” “We hear him, we feel him, Fidel is present!” were the phrases chanted by the multitude of youth gathered on the same steps Fidel climbed every morning in his conquest for knowledge, to commemorate the day that the eternal youth began his journey into eternity; same day 60 years before when he and other expeditionaries set sail on the Granma yacht to free Cuba.
Leading that expedition, “the man that taught us to be, the leader par excellence, Marti’s loyalist follower, our comrade in the struggle” as President of the National Organizing Committee of the Federation of Secondary School Students, Niuvys Garcés described him; Fidel, the man who transcended “the borders of his time” to “live forever among is people.”

“That’s how we feel you Fidel, more present and alive (…) Every day you call on us to attack the Moncada Garrisons, to be the Granma yacht expeditionaries, to ask ourselves what we must improve in order to be outstanding students (…) how to love our history more and defend our homeland under any circumstance.” 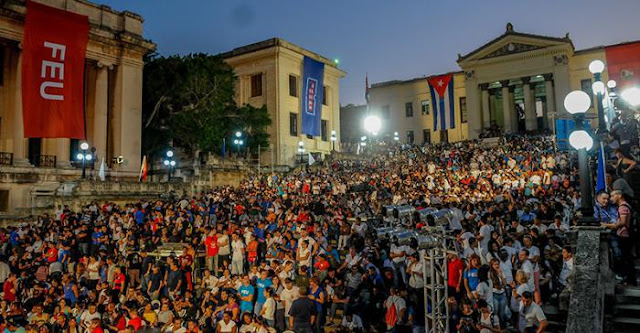 During the ceremony, which also saw the participation of Olga Lidia Tapia, a member of the Party Central Committee Secretariat, and Susely Morfa González, first secretary of the Young Communist League (UJC) National Committee, the young student noted that everyday Cubans must think “what would he (Fidel) do if he was here,” and reflect on his concept of the true essence of Revolution.
Because, as Raúl Palmero, President of the Federation of University Students (FEU), “the giant” left us a noble nation and redefined the role of youth; he transformed all of Cuba into a university, and gave us the greatest gift of all: “an independent homeland built with pride and which will never surrender.”

Palmero went on to recall a message sent by the Comandante en Jefe to the FEU on January 26, 2015, in which he “warned that imperialism cannot be trusted,” and in so doing, the historic leader of the Cuban Revolution supplied students with weapons and the truth, “like just another classmate.”

The poem Canto a Fidel, in addition to songs which have become narratives of the Revolution, such as “La Bayamesa,” “La Era,” “Mi historia crecerá,” “Cualquier lugar es mi tierra,” “14 verbos de junio,” and “Cabalgando con Fidel,” were just some of the musical offerings presented during the ceremony, which also saw performances by Trova singers Raúl Torres, Eduardo Sosa, Annie Garcés and Vicente Feliú; as well as groups like the Jazz Band, Arnaldo Rodríguez y su Talismán, Moncada and La Colmenita; the company Tiempos and actor Alden Knight, among others.


The ceremony was also attended by the heads of the ministries of Education and Culture, Ena Elsa Velázquez Cobiella and Abel Prieto Jiménez, respectively; senior officials of the UJC, youth movements and other guests.