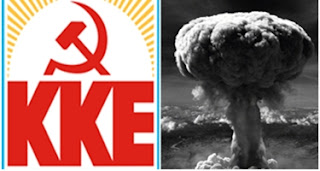 "This year marks the 72nd anniversary since the U.S. imperialist crime in Hiroshima and Nagasaki, an act which did not serve any military need against the- already defeated- Japan, but the intimidation of the people, of the Soviet Union and the then rising socialist system and communist movement. Thousands of people lost their lives from the dropping of the atomic bombs, while thousands continue dying every year as a result of radioactivity's consequences.


Today, 72 years later, the people continue facing the most repulsive product of capitalist barbarity, the imperialist war. The sharpening of the antagonisms between states and monopolies, for the distribution of markets and energy resources, across the world and especially in our region, consist the cause of military interventions, of the dozens local and regional wars, of borders' redrawing, with the people being the victims and thousands of refugees and uprooted ones. They increase the risk of a generalized imperialist war. They confirm the need for the workers-people's movement to be firmly in the direction of the struggle against imperialist war and its causes.

All the above prove how fake and misleading is the argument of the SYRIZA-ANEL government that Greece consists "an 'islet' of securityand stability" in a burning region. And all these when the current government, like the previous ones, willingly and actively participates in all the dangerous plans of the USA, NATO, EU in the region. The government has legitimized NATO's presence in the Aegean, expands NATO's bases in Greece and has supported all NATO's decisions which, within the context of competion especially with Russia, move towards actions that can cause a real holocaust to the people of Europe and general.

Capitalism cannot be humanited, it can neither give solutions to the basic problems of the people nor secure peace for the people. The imperialist wars will exist as long as the power is in the hands of the capitalists. * On the 72nd anniversary of the imperialist crime in Hiroshima and Nagasaki, the Greek Committee of International Detente and Peace (EEDYE) organises in Athens an event in honor of the victims, Tuesday 8 August 2017, at 8 pm at the Acropolis. A similar political event will take place in Thessaloniki, also on Tuesday 8/8.