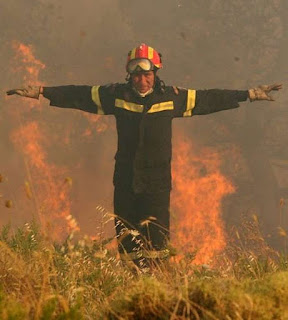 ΚΚΕ: Both SYRIZA and New Democracy share responsibility for their policies over forest protection, land commercialization, privatization of firefighting services.

Communicating with the Citizens Protection Minister Nikos Toskas, the parliamentary representative of the Communist Party of Greece Thanasis Pafilis asked for measures in order to combat wildfires, while a KKE group headed by MP Giannis Giokas visited the area of Varnavas in Attica.

In a statement issued on Monday, the KKE mentions: "The existence of a possible arson plan based on the commercialization of the land, not only does not decrease, but increases the responsibilities of the SYRIZA-ANEL government which, following the policy of the ND-PASOK governments, maintains and strengthens the under-funding and the huge deficiencies in the sector of forest protection and firefighting. As a result of that, the "fight" between the SYRIZA-ANEL government and New Democracy over the burned land, cannot hide their guilt for their "incendiary" policy". (Source: 902.gr).

In an interview with Real FM radio, the retired firefighter and KKE member Michalis Michael, underlined that the state authorities should be ready to combat the weather conditions, the many fronts and any arson plan but it is not because the policy of the governments is to shrink spending on fire protection.

As Michael said, since 2009 and each following year, 120 million Euros have been reduced from the Firefighting Service budget and added that hundreds of firefighting vehicles are stationary due to faults, because the necessary credits do not exist.

Moreover, he said that the force of the Firefighting Service has been decreased by 4,000 seats in the permanent, while the aim is the privatization that has already taken place with air-firefighting and commercialization, the sale of fire safety as it has been done with Fraport, as well as of the privatized road axes.