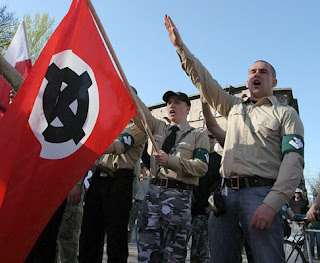 In a statement, the Communist Party of Poland (Komunistyczna Partia Polski) denounces the attempts of the Polish state- supported by various institutions and the Catholic church- to falsify history and erase the crimes of fascism from the public memory.
Changes of street names carried out under the “Decommunisation Act” serves the purpose of falsifying History in the interest of the ruling right wing. Historical policy implemented by the state institutions discriminates, on political grounds, anyone associated with communism, regardless of his/her significance or achievements. The list of toponyms that are to be changed is still expanding and includes not only those directly involved in the communist activity.

The vast majority of those toponyms on the list of the Institute of National Remembrance (IPN) are the names of the heroes of the struggle against fascism. Many of them were killed by the Nazis. The list includes the names of eight people who were murdered on 16th of October 1942 in the first public execution in Warsaw.

On 10th of May, one day after the anniversary of the Victory over fascism, the list of street names to be changed in Wroclaw was published. It includes, for instance, the street of Victims of Auschwitz (Ofiar Oświęcimskich) commemorating over one million people murdered in Auschwitz concentration camp.
Decommunisation is also associated with attempts to erase fascist crimes from the public memory and to promote fascism. With the participation of the IPN, nationalists and bandits are being promoted as new heroes. Even the perpetrators of war crimes and ethnic cleansing go on the street names. The “Decommunisation Act” is a part of a wider offensive of the right wing. One of its aims is to create consent for persecuting opponents of capitalism.
As a result of current historical policy, the nationalist and neo-fascist movements act unpunished. With the support of the state institutions and the Catholic church, they openly organize marches and other propaganda actions. We cannot allow this, especially in a country that suffered enormous losses as a result of genocidal policies of the Nazis during the Second World War.
Such harmful activities can be stopped only by strong social resistance.
We call to oppose decommunisation of the streets and historical remembrance!
CC of the Communist Party of Poland.