On the dangerous and provocative remarks by New Democracy's Kyriakos Mitsotakis 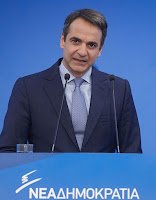 Adopting the "arguments" of Golden Dawn's neo-Nazis, the president of the centre-right New Democracy (ND) party Kyriakos Mitsotakis made some dangerous and provocative remarks blaming the "Left" as the one responsible for "terrorism" in Greece.

In an article published on 'politico.eu' under the title "Greece fears revival of far-left violence", Mitsotakis fully adopts the rhetoric of Golden Dawn's fascist thugs: “We are the only country [in Europe] that has domestic terrorism of the extreme left” said Mitsotakis who tried to downgrade the criminal activity of the Nazi Golden Dawn.

More specifically, 'Politico' points out: "However, Mitsotakis played down the impact of Golden Dawn on Greek society, saying it was “so extreme and so vulgar” that it was marginalized. “It’s as if they don’t exist” he said. “The violence has been almost exclusively from the left in recent years”.

With the above statements, Kyriakos Mitsotakis shamelessly "exonerates" the criminal role of Golden Dawn, a Nazi-fascist organization which is responsible for numerous murderous attacks on immigrants and workers.

Apparently, Mitsotakis' interview and his anti-left remarks consist another episode in the bourgeois bipartite "dogfight" between SYRIZA and New Democracy. However, it becomes clear that his effort to blame the "Left" as the womb of terrorism goes far beyond than the SYRIZA-New Democracy political rivalry: In fact, with his hideous and unacceptable remarks, Mitsotakis puts in target the workers-people's movement, equating it with the activity of provocative groups (e.g. November 17).

Of course, Mitsotakis' remarks on 'Politico' were hailed by the Golden Dawn Nazis who congratulated him for his statements: "Here is the big truth Mitsotakis said- well done to him" the neo-Nazis wrote in their website.

Commenting on Kyriakos Mitsotakis' interview and his remarks on "terrorism", the Press Office of the CC of the Communist Party of Greece (KKE) pointed out:

"The effort of Kyriakos Mitsotakis to create dangerous associations, by actually connecting the activity of provocative groups with the workers-people's movement, on the one hand strengthens the environment of repression and on the other hand adopts the arguments of Golden Dawn, the criminal activity of which he totally silences".