KKE: Solidarity with the struggle of the Palestinian political prisoners in Israeli jails 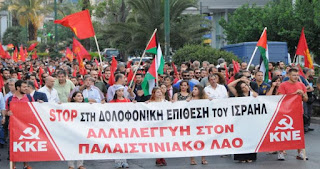 Statement of the International Relations Section of the CC of the Communist Party of Greece (KKE).

The KKE expresses its solidarity with the struggle that thousands of Palestinian political prisoners in Israeli jails began on 17/4/2017 and demands their immediate release.
The KKE in general expresses its full support with the struggle of the Palestinian people against the Israeli occupation that has been going on for decades with the responsibility also of the USA, EU, NATO.


The SYRIZA-ANEL government bears enormous responsibilities because in the framework of the perpetuation of the occupation and intensification of the Israeli aggressiveness against the Palestinian people it implements a policy of deepening-reinforcing political-military and economic relations with the state of Israel.
The KKE calls on the Greek people to intensify their support for the struggle of the Palestinians against the settlements, the imprisonments and every kind of repressive measure, for an independent Palestinian state, on the 1967 borders, with East Jerusalem as its capital, with the people sovereign.

International Relations Section of the CC of the KKE.
18.4.17.