MESSAGE OF TRADE UNIONS AGAINST THE IMPERIALIST WAR 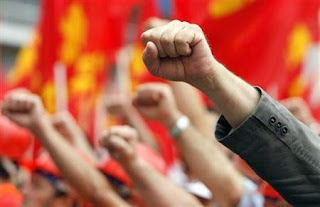 MESSAGE OF TRADE UNIONS AND TRADE UNIONISTS.
AGAINST THE IMPERIALIST WAR.
With the workers of all countries, for a world without exploitation, wars, and refugees.
This 1st of May we are in the eye of the imperialist storm. The outbreaks of armed conflicts are spreading through from Ukraine to the Black Sea, the Balkans, the Aegean Sea and the Eastern Mediterranean, the Middle East and North Africa.


Powerful forces are involved in the competitions, such as the United States, the EU, Russia with the active participations of the governments of our countries in for the control of oil, natural gas, the roads of energy transfer, markets, in the interest of the monopoly groups.


The war in Syria, which has claimed the lives of hundreds of thousands of people and turned millions of others into refugees, is the result of intra-imperialist competitions, a multiform imperialist intervention. It shows how capitalism, which increases the wealth for a "handful" of exploiters, at the same time, it creates crisis, social problems, war, refugees, with devastating consequences for millions of workers.
The imperialists divide the world with the blood of the people; they create nationalist rivalries among the peoples.
The Balkans have experienced the bloody and destructive dissolution of countries by imperialist war, the change of borders.
NATO army and fleet spread over from the Baltic to the Balkans, the Black Sea, the Aegean Sea, the Mediterranean, defending the interests of this “alliance of wolves”, the interests of its monopolies in the area against their competitors.
The all-out attack which condemns the working classes in every country in unemployment, poverty and misery, is the one side of the coin of class policy.
The other side is the unfair imperialist war, which they wage in the interests of large monopoly groups.
Faced with the possibility of a widespread military conflict in our region, we build a wall of protection for the working class of our countries, for our people, in joint action and solidarity between the peoples and with the Trade Unions in the first line of this fight.
We fight for all of our rights, demanding the satisfaction of the contemporary needs of working-class families. We are fighting against exploitation and against our exploiters.
This fight is inextricably connected with the fight against any participation of our countries in the war prepared by our exploiters with their power, their governments and their alliances with USA - NATO - EU, against the workers in other countries.
The bourgeoisie promotes their class interest for profits as "national interest” both in times of "peace" and war.
We will not bleed for their profits; we will not become meat in their cannons.
There is nothing to divide among the working classes of other countries, among other people. On the contrary, we are united by the common interest of fighting for a life without riches and poverty, without bosses, this is the life that belongs to us.
That is why we are fighting for:
We Do Not Stand Behind The Foreign And Hostile To Us Flag Of The Capitalists And Their Allies. We Raise The Flag Of The Interests Of The Working Class.
We Are Fighting Against The Unjust Wars, To Eliminate What Causes Them.
Solidarity Is The Weapon Of Peoples.
Currently signed by:
PAME- Greece
Nakliyat Is – Turkey
Sosyal Is – Turkey
Birlesik Metal Is - Turkey
Autonomous Trade Union of Employees in Agriculture, Food, Tobacco Industry - Serbia
SLOGA - Serbia
GFTU –Syria
WUCP – Palestine
Left Bloc – Austria
Cyprus – KTOEOS
USB – Italy
SGB - Italy