CP OF UKRAINE:
PERSECUTION OF COMMUNISTS IN UKRAINE IS ONGOING.
Source: Solidnet.org.

KIEV- Lysychansk City Court of Lugansk region considered criminal case on charges of Communists Tsymbal and Ryzhevol under Part 2 of Art. 110 of the Criminal Code of Ukraine and sentenced to 3 years in prison each. This sentenced term of improsinment is calculated from 29.09.2015- from the moment of their actual detention. And the term of detention from 29.09.2015 to 21.03.2017 is calculated at the rate of one day of detention for two days in prison bazing on the Criminal Code of Ukraine, credited in the term of punishment imposed by this sentence,
Using abovementioned rate time of imprisonment of Comrades Tsymbal and Ryzhevol is ended. But they are still imprisoned. So, they are now serving sentences longer than the defined by the sentence, which is unacceptable, so deprived of their liberty unlawfully.
At this time of three years term of the sentence is ended even without crediting one day of detention for two days in prison.
Nevertheless, complaint of our lawyers was rejected by the court. This extra imprisonment is contrary not only the legislation of Ukraine but to the European Convention on Human Rights and Fundamental Freedoms and jurisprudence of the European Court for human Rights (see “Bozano v. France” of December 18, 1986, p. 60, “Khodorkovskiy v. Russia” number 5829/04 , p. 142, of May 31, 2011, “Khayredinov v. Ukraine” number 38717/04, para. 27-28, of October 14, 2010 etc.)
According to Article 6 of the European Convention on Human Rights everyone has the right to a fair and public hearing within a reasonable time by an independent and impartial tribunal established by law decide its determination of his civil rights and obligations or of any against him criminal prosecution.
Currently, there is pure reason to believe that the detention of comrades Ryzhevol and Cymbal is arbitrary and consists a violation of Art. 5 of the European Convention on Human Rights.
Communist Party of Ukraine, Central Committee
Department for the International Relations.
* * *
ITALIAN COMMUNISTS PROTESTED AGAINST THE IMPERIALIST WAR IN SYRIA.
Source: Partito Comunista.

ROME- In front of the capital's best known landmark- the Colosseum- members from the Communist Party and the Front of the Communist Youth (FGC) demonstrated against the imperialist military aggression against Syria. The purpose of the demonstration was to show that in Italy there is another response to the war- different from the one of Gentiloni's government (which has already declared its support to the US military intervention).
In its message, the Communist Party of Italy points out that this anti-imperialist stance must reach the working people and the youth of the country's popular strata who have nothing to benefit from this war. This is a war pursued by the multinationals, the big monopolies from the energy sector.
* * *
KKE: SOLIDARITY TO THE COMMUNISTS OF VENEZUELA - MEETING WITH THE VENEZUELAN AMBASSADOR IN GREECE.
Source: 902.gr.
ATHENS- On Tuesday morning, a delegation of the KKE comprised by the member of the CC and MEP Kostas Papadakis and the member of the Central Committee's International Department Nikos Seretakis, visited the Embassy of Venezuela and met with Ambassador Farid Fernandez. The purpose of the visit was to protest against the efforts of the National Electoral Council of Venezuela to ban the Communist Party of the country.
The KKE cadres underlined that it is unacceptable to use a law passed during the period of a police-state and anticommunist regime in order to prohibit the activity of the communists. They pointed out that this attempt against the CP of Venezuela (PCV) is taking place at a time when the deadlocks of the capitalist way of development in Venezuela are being manifested and the threats against the people and the popular movement are sharpening. The government of the country and the political forces which support or tolerate this attack bear big responsibilities, said the KKE members.
The Ambassador pledged to deliver the KKE protest to his government.
* * *
DPRK: THE KOREAN PEOPLE'S ARMY (KPA) BLASTS U.S. DOUBLE STANDARDS.
Source: KCNA.
PYONGYANG- A spokesman for the General Staff of the Korean People's Army (KPA) answered the question put by KCNA on April 10 as regards the fact that the U.S. is pulling up the KPA over its measures for self-defence while shamelessly conniving at the provocative actions of its stooges.
Noting that the U.S., accustomed to groundlessly taking issue with the DPRK, went reckless in its anti-DPRK campaign even in the UN arena with riff-raffs involved, describing each military drill of the KPA as a "serious provocation" and "threat", the spokesman said:

This reckless action of the U.S. hell-bent on the hostile policy toward the DPRK is not something new and surprising.

However, the double-dealing approach taken by the U.S. towards the provocative actions of its stooges against the DPRK can never be overlooked.

The south Korean puppet forces are now claiming that "they could strike the whole of the north" and that "they would deploy ballistic missile Hyonmu-2 with the firing range of 800km for an actual battle within this year" but the U.S. keeps mum about it as we expected.

This is a brazen-faced stance quite different from its reaction to the routine rocket firing exercise of the KPA.

Crystal clear is the reason why the U.S. is resorting to such mean gimmick. The U.S. seeks to stifle the DPRK by force at any cost, even discarding any decency and impartiality.

It shows the true colors of the U.S. styling itself the world's "judge".

Emboldened by their master's unfair double standards and double-dealing attitude of making profound confusion of right and wrong, the south Korean puppet warmongers and the Japanese reactionaries, are now going reckless, not afraid of any punishment from the Heaven.

The U.S. should ponder over the serious consequences to be entailed by its self-righteous and unilateral actions against the DPRK.

The south Korean warmongers and the Japanese reactionaries had better stop behaving foolishly.

The brigandish double standards of the U.S. can never be pardoned. 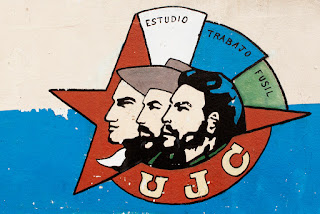 HAVANA- The Young Communist League (UJC), founded on April 4, 1962, has seen its membership increase. The organization currently has 300,752 affiliates and over 33,000 grassroots committees. It continues to respond to today’s challenges by calling for increased participation in its aim to represent all Cuban youth

As part of activities to mark the 55th anniversary of the Young Communist League (UJC) this April 4, schools across the country held special assemblies, while membership cards were presented to new affiliates of the organization and outstanding students and young workers were also recognized.

Speaking during a press conference in Havana held prior to celebrations, Susely Morfa González, first secretary of the UJC National Committee, stated that “Every activity will have the color, joy and optimism which have characterized this organization for over half a century.”
Fifty five years after its founding, the UJC is proud to be composed of the vanguard of Cuba’s youth, and of the work it continues to do in support of children across the island.
The organization, created on April 4, 1962, has 300,752 members and more than 33,000 grassroots committees. Not only has the UJC’s membership increased, but the organization has made and continues to make concerted efforts to listen and respond to proposals by young people across all sectors.
“Despite the high figures, we want to keep adding more young people and ideas. What is more, we continue to strengthen the organization and its political processes, encouraging and motivating new generations to learn more about Cuba’s history in a more inclusive, humane and creative way,” stated Morfa.
Throughout its existence the UJC has worked to foster the value of making a useful contribution to society in Cuban youth. “There are those who question whether younger generations are conscious of their social role. I believe that they are,” noted the organization’s first secretary, who is also a member of the Communist Party of Cuba Central Committee.
Of the almost three million young Cubans living on the island, “I dare say that the immense majority are revolutionary,” Morfa added.
Many continually put their intellect and interests toward supporting the development of Cuban society something which “the organization attests to on a daily basis, every time we interact with them. There is broad representation of young people across all sectors of our economy, from where they contribute to our country’s development.”
One example, she noted, is the sugarcane sector, where young people represent 65% of the workforce. Similar levels of participation can be found in spheres such as public health and agriculture. “We recently met with young tobacco growers in Pinar del Río, whose efforts not only contribute to boosting the economy, but also preserving a tradition,” stated the first secretary.
Over the last 55 years, the UJC has also been consolidating the way in which institutions and ministries respond to the needs of the island’s youth, who are represented and participate on governing boards and commissions responsible for making decisions which will impact the new generations.
SUPPORTING YOUNG WORKERS


Susely Morfa described as exemplary the relationship between the UJC and National Association of Small Farmers, where the organization has over 8,000 members, as well as its efforts to protect and motivate young Cubans once they enter the workplace, whether it be in the state or private sector.
In 2016, the UJC organized various activities with young non-state sector workers, “where we saw many positive results, shared, exchanged, and listened to these young people. We were accompanied by representatives from the Party, government and relevant institutions in order to respond to queries by those starting out in this form of management,” she added.
This year the UJC has proposed “to continue supporting them (young private sector workers) to combat illegalities, fortify our patriotic symbols, explain to them their rights in this sector, and which ministries and organizations to approach with their queries.”
Among its priorities, the UJC is also proposing to intensify work with secretary generals of grassroots committees. “We cannot forget that although we are an organization that represents the youth, we are also a political organization, home to the vanguard. Therefore, we must continue to strengthen the functioning of our grassroots committees and to encourage youths to take on leadership roles.”
As long as young leaders love the organization, and search for something to do to improve their surroundings every day, consolidate the UJC’s ideological work, and bring together more ideas to continue building the Revolution, members and youths will want to be like them, and will accompany them in this integrationist work, commented the first secretary.
INCREASING PARTICIPATION


The UJC will continue promoting historic tours, summer camps, workshops, and forum-debates, among other important activities for Cuban youth, where they will also have the opportunity to learn more about the island’s history and culture.
“We are working with the Ministry of Culture so that our youth can enjoy recreational offers which feature both our best values and are affordable,” she added.
Cuba’s youth is the continuation of the generation that founded the Revolution, not its substitute, stated Susely, who went on to note that the new generations, strongly committed to the legacy of historic leader Comandante en Jefe Fidel Castro, and the support of the Communist Party of Cuba, will continue to defend socialism and participate in the economic and social transformations that the country needs.
“Those of us who wish to defend, transform, create and preserve everything that has been achieved over these last 55 years will always be with the UJC. Our aim is to increase participation in order to be an organization for all, so that every young person feels a greater attachment to it,” she concluded.