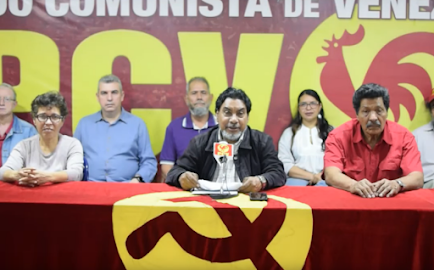 Oscar Figuera has been re-elected as the General Secretary of the Central Committee of the Communist Party of Venezuela (PCV), following the party's successful 16th National Congress.

In its first plenary session, the renewed Central Committee appointed Figuera as General Secretary and Perfecto Abreu Nieves as President of the PCV.

“We assess the 16th National Congress as a total success”, said Oscar Figuera pointing out that the Congress took place in a context of “threats, pressure and aggression from the government's leadership, chaired by Nicolas Maduro and the PSUV” against the PCV.
The General Secretary stressed out that “the PCV is an autonomous and independent, marxist-leninist organization, which draws on the historical struggle of our people and on the emancipatory thought of Simon Bolivar”.

“All external intentions were defeated as well all the aspirations to divide the PCV and infuence its decisions”, Figuera added.

The 16th National Congress of PCV confirmed the party's marxist-leninist ideological orientation, against social democratic illusions and strengthened its cohesion for the struggles that are ahead.