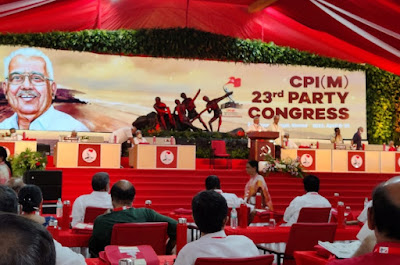 All of them have been considered and a Report on Pre-Congress Amendments was presented by the General Secretary to the Congress listing out those that have been accepted by the Central Committee and placed before the Congress.

The discussion on the Draft Political Resolution began in the morning of April 7.

In the morning session today, the Congress also adopted a resolution calling for large scale protest actions against the utterly callous manner in which the BJP central government is permitting the announcement of a daily hike in prices of petroleum products which has triggered a spiralling overall inflationary cycle heaping more untold miseries on the people. It demanded the immediate withdrawal of additional taxes imposed during the NDA regime. It also demanded that the government increase taxes on the rich, impose controls on and reduce the retail prices of petroleum products, and stop the privatisation of public sector undertakings in the petroleum sector.  (A copy of the resolution is attached)

The 23rd Congress, which takes place from 6 to 10 April 2022, has received messages of greetings from 40 fraternal Communist and Workers parties from various countries.

List of Fraternal Parties from whom we have received Greetings