Museum in honor of communist guerrillas unveiled in Greece 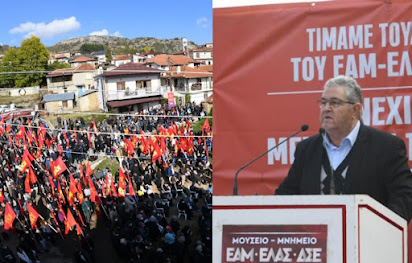 “The KKE is the power of the people today, because it doesn't enter the fold of the false 'national arrangements', it does not obey the hostile for the people bourgeois plans”, pointed out Dimitris Koutsoumbas, General Secretary of the CC of the Communist Party of Greece (KKE), during his speech in the northern Greek town of Nestorio on Sunday morning.

The speech was given on the occasion of the inauguration of a Museum-Memorial for  the communist guerrilla fighters of EAM-ELAS and the Democratic Army (DSE), who fought against the Axis occupation and during the Greek Civil War respectively. The Museum was a donation by Harisis Tsoutounis who provided a space “in memory of his militant parents”, as well as to “honor the struggle of EAM-ELAS and DSE, to which the people of the area contributed significantly”.
Among others, Dimitris Koutsoumbas said: “All these years, even more intensely on the occasion of the 100th anniversary of our party, we highlighted the presence of the KKE as a carrier of innovative ideas, as a pioneer of organized force, inspired by a society without exploitation of man by man. That is why with self-denial and self-sacrifice (the KKE) enters the front under all conditions, in order to defend the life and the rights of the working class, of the youth, of the working people of the city and the countryside. With memorials, museums, publications, we highlight the heroic struggles, the activity of people who were inspired by the KKE and took their destiny in their hands. We want to honor these thousands of fighters with a network of places of memory, honor but also knowledge”.
Speaking about Nestorio, a village close to the Greek-Albanian borders, the KKE General Secretary praised it as a “village of guerrillas, who provides 600 guerrillas in ELAS and hundreds more in DSE” thus contributing to the great struggles of communist-led armies in 1940-1949.

“It is history that shows us that the only force that united the people in this titanic struggle was the KKE. Its call for resistance wasn't a product of the moment, but the sowing of years and years back and the time had come to bear fruit”, Dimitris Koutsoumbas concluded.

Similar monuments, dedicated to the heroism of EAM, ELAS and the Democratic Army, have been unveiled by the KKE in numerous historic places across the country, where major battles took place during the Axis occupation and later during the 1946-1949 Civil War.