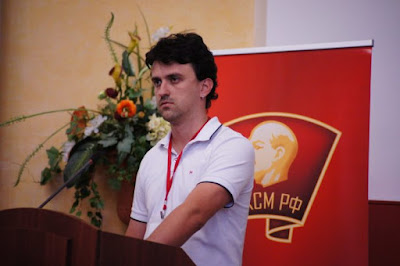 Disturbing news come from Serbia where fascist thugs unleashed anonymous death threats against a young communist leader.
According to a post by the League of Communist Youth of Yugoslavia (SKOJ) fascists threatened its First Secretary Aleksandar Đenić. More specifically, right-wing extremists (Chetniks) called Denic on Sunday evening, insulted him and threatened to break his legs and ribs. The fascists said that they know where he lives and even threatened ambush and murder him.
This is not the first time that Serbian communists receive such vulgar threatening messages by Chetniks. Đenić himself has been a target of similar personal attacks on several occasions in the past.
The young communist reported the case to the Ministry of Internal Affairs and SKOJ have called Serbian authorities to investigate the issue and find the cowards who are behind these heinous threats.
In a public message the League of Communist Youth warn the Chetniks "that comrade Aleksandar Đenić, as a descendant of partisans and as communist, will not back down in face of such useless threats" and adds: "Communists are people of a special kind who are not afraid of cowardly Chetnik attacks. The Communists will unreservedly and ruthlessly fight to the last breath and drops of blood for a world without exploitation, racism, fascism, chauvinism, interethnic hatred and all other reactionary forms of government."
The League of Communist Youth, the New Communist Party of Yugoslavia (NKOJ) and the World Federation of Democratic Youth (WFDY) stand in full solidarity with comrade Denic and warn the fascists to keep their hands away from the communists.
IN DEFENSE OF COMMUNISM ©