Turkish President Erdoğan yesterday signed a decree allowing Hagia Sophia Museum to be used as a mosque. The decree came after a Turkish court revoked the site’s 80-year-old status as a museum, which is a World Heritage Site.

Communist Party of Turkey (TKP) has released a statement on the move that also provoked an international debate, stating that this is a conflict between reactionism and secularism. The full statement is as follows:

1. The current discussion about the transformation of Hagia Sophia into a mosque was reintroduced by İYİP, the fascist party in the opposition, which is a partner of the social-democratic CHP in the parliamentary oppositional alliance, by means of a parliamentary research proposal. It actually was a long-standing intention of the reactionary veins in Turkey. This act received the appreciation of many members of the opposition parties, such as the former Presidential candidate of CHP, Muharrem İnce and the current mayors of big cities, who are affiliated with the opposition. It was not at all criticized by the opposition from the beginning. On the contrary, some opposition representatives, including the MPs of the pro-Kurdish HDP have been expressing their enthusiasm for praying under the roof of Hagia Sophia.

What AKP has done was first to negate the discussion in the parliament on this issue and later on, to order directly to the Council of State, which is practically under the control of executive power, namely Erdoğan himself, to cancel the decision of reopening Hagia Sophia as a museum of 1934.

This was a reaffirmation of the power of the executive in Turkey. In the end, one can conclude that the Turkish bourgeoisie has acted unitedly in commencing this discussion and approval of the transformation.

2. Canceling the decision of the cabinet of 1934 also meant negating the progressive values of the bourgeois revolution of 1923, namely republicanism, secularism, and modernity.

3. The religious fundamentalism of AKP has transformed each and every public institution in Turkey, including law, academia, education, press and every other aspect of social life, rendering these areas being dominated by the rules of Islam. TKP has repeatedly addressed the anti-worker role of reaction and religious fundamentalism, oppressing every single bit of resistance within the working class and replacing the organized power of united workers with apolitical obedient masses. The danger of reaction is more than the surface appearance of it. Just one week ago, a fireworks factory exploded in Turkey, causing deaths and leaving tens of workers injured. The boss, who was the local head of MUSIAD, pro-islamic capitalists’ association, was not actually punished at all, and instead was supported by other capitalists in the region and the country.  The same organization had proposed “labour camps” as a solution to overcome the losses in their profits during the pandemic, which had been endorsed by the government a few weeks ago. It is not a coincidence that right in the same week, Hagia Sophia was approved to be transformed into a mosque. The capitalist class of Turkey has systematically abused religion to gain power in labour relations. Now, given the deep economical crisis in the country, poverty, unemployment, hopelessness, and enormous discontent among workers, the capitalist class is trying to avoid the politicization of workers and left currents gaining momentum, by again resorting to reaction.

4. The decision indeed entails a provocative move on the international level. The pragmatic policy of AKP, based on daily maneuvers within the cracks of the imperialist system and its oscillations between the imperialist powers, is losing ground. The country is on an economic downfall, with unprecedentedly high levels of domestic and foreign debt. Erdoğan is trying to restore his political negotiating power by intimidating other countries, such as moves against France in Libya, military actions on Syrian territory or incending nationalistic conflicts against Greece; but it is obvious that this power is way too limited to scare the major powers or imperialist alliances, the US, EU, NATO and others, that the government is by all means dependent on. 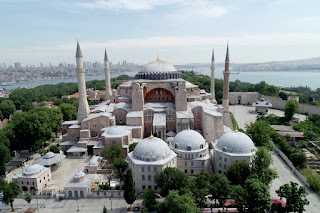 5. The guidance of proletarian internationalism, as defined over a hundred years ago by the Bolsheviks, is clear. The conflicts between the bourgeois class of each country, such as nationalist or religious quarrels, competition and claiming rights on resources, etc. cannot form the ground of discussion for communists. Reading such moves from the agenda of the bourgeois class will be immensely misleading. The conflict is not the one between Christianity and Islam, but between reaction and secularism and more precisely between the capitalist class and the workers.

6. The core of the Hagia Sophia issue is the dominance of right-wing politics in Turkey, by both the ruling and oppositional alliances. It is another brick in the wall of elimination of secularism from Turkey’s political atmosphere. It fosters the repression of egalitarian thoughts and struggle.
Communists in the world should condemn this decision and the bourgeois reactionary mindset behind it, which obscures the future of Turkey’s working class.

7. TKP has defended and will defend the position of Hagia Sophia to remain as a public museum, as one of the highest preserved historical monuments and a bright example of the cultural heritage of humanity. Standing against any intervention in the structure of the building that will do harm to its originality is therefore a universal responsibility.

KKE: The decision on Hagia Sophia reflects the escalation of Turkish aggression which is supported by the imperialists

In a statement issued on Friday, the Press Office of the CC of the Communist Party of Greece (KKE) pointed out:

"The decision to convert Hagia Sophia, a World Heritage Monument, into a mosque was orchestrated by the Erdogan government and consists another element in the escalation of Turkish aggression.

From this point of view, this act is not only a straightforward derogation of Hagia Sophia’s character […] but it is also a link in the overall strategy of the Turkish bourgeois class, which is supported by the stance and the plans of the USA, NATO, EU in the region."

Commenting on the issue today, the General Secretary of the CC of the KKE Dimitris Koutsoumbas pointed out:

“The unacceptable and provocative decision of Erdogan’s government to convert Hagia Sophia, a World Heritage Monument, into a mosque, proves that Turkey’s aggression escalates step by step. At the same time, it sharpens the religious and nationalist competitions, which are utilized by the powerful ones for the division of the peoples.

Nonetheless, similarly provocative are the corny reactions both of the USA as well as of the EU, exposing the (Greek) government and all the pro- US-NATO parties which have proclaimed these alliances into defenders of international law, while they are the same ones which tolerate – if not encourage – the aggression of Turkey”.