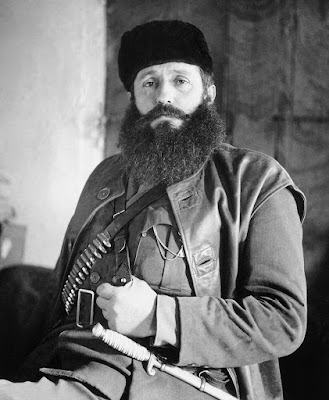 In 1927 he moves again to Athens where he undertakes various organizational tasks in the Communist Party (KKE), including editor in “Rizospastis” newspaper. During Metaxas’ dictatorship he was sent into exile in Gavdos and in 1939 he was transfered to Corfu prison. Tricked by dictatorship’s authorities and Michalis Tyrimos, a KKE cadre turned government’s informer, Velouchiotis was forced to sign a “statement of repentance” (denouncing communism) in order to be released.

During the Italian-Greek War (28 October 1940 – 23 April 1941), Aris participates in the Albanian Front fighting against Mussolini’s invaders. In November 1941, after the foundation of EAM (National Liberation Movement), he was sent by the Party to Lamia where he began his activity as a guerrilla fighter.

From the beginning of the war, Aris Velouchiotis showed his exceptional abilities, both in organizational issues as well as in the battle. Alongside Major General Stefanos Sarafis, he contributed significantly to the creation of the first ELAS resistance groups. Furthermore, his role was instrumental for the establishment of military and moral rules within the guerrilla movement, strengthening the relations between the People’s Liberation Army and the poor masses.

As ELAS’ Captain, Velouchiotis participated in numerous fights against Nazi-fascist conquerors and their local collaborators (Security Battalions). A major success was the demolition of the heavily guarded Gorgopotamos viaduct in Central Greece on 25 November 1942.

A few days after the liberation of Athens, on 23 October 1944, Aris Velouchiotis gave a public speech in his hometown, Lamia. In this speech, which was the last public address by Aris, the communist guerrilla makes some very interesting statements, also responding to the then fierce anti-communist propaganda of Greek bourgeois powers.

Among other things, Aris was pointing out:

“But we are being attacked now by a new argument. We are being condemned as being all communists and they are stating that EAM and ELAS are Communist Front organizations. But does this accusation constitute shame or award?

At the moment, the Communist Party isn’t fighting for communism. Of course, in its programme the KKE has communism as its ultimate aim. But not for now.  Communism will be imposed by you the people and not by the KKE. And I am sure that many educated ones who don’t want it today, will vote for its domination in the future. But today the KKE does not aim anything but a democratic solution to the Greek problem.”

He also referred to the slanders by bourgeois forces which were questioning the patriotism of EAM and KKE. On this issue, Velouchiotis said:

“They accusing us that we want to abolish borders and dissolve the state. But we are building the state today, because it didn’t exist because they had dissolved it. Who therefore is a patriot? They or us? Capital has no homeland and runs to find profits wherever they exist. That is why it doesn’t care about the existence of borders and the state. But all we own are our hats and small terraces. Unlike capital that goes wherever profits exists, these cannot be moved and remain in our country. Who therefore can be interested more for his country? Those who export their capitals out of the country, or us who remain here with our terraces?”

Aris opposed the 1945 Treaty of Varkiza which led to the disarmament of ELAS. He returned to the mountains to continue the guerrilla war, disobeying the then Party decision. In June 1945, his small guerrilla group was surrounded by forces of the bourgeois army in the village of Mesounda, near Arta. Facing the possibility of arrest and execution by his enemies, Aris decided to end his life.

The remains of Velouchiotis and his comrades became subject to horrible desecration by right-wingers. Their heads were cut off and hanged in the central square of the city of Trikala. The corpse of Aris Velouchiotis was never found.

Despite the fact that the then Party leadership had renounced Velouchiotis for his decision to disobey the Varkiza Treaty, the KKE gradually rehabilitated him in the following decades. The political rehabilitation of Aris was the subject of a discussion for the 2nd Volume of the Party History Essay during the Nationwide Conference of the KKE in 2011.

The 2011 Nationwide Conference of the KKE decided that Velouchiotis was correct in his evaluation of the Varkiza Treaty. Nonetheless, the Conference added that it was a mistake from his side to violate the Party discipline by disobeying the collective decision.

On June 2018, after extensive historical research and dialogue, the KKE proceeded to the full rehabilitation – both politically as well as a Party member – of Aris Velouchiotis. At the same time, the KKE denounced the attempt of bourgeois and opportunist forces to distort the historical events and manipulate the political legacy of Velouchiotis against the Party.

The truth is that Aris Velouchiotis’ life and activity are inextricably connected with the Communist Party of Greece. Despite his disobedience towards the – erroneous- Party’s decision in 1945, he remained faithful to the KKE until the end of his life, never renouncing the Party to which he belonged. 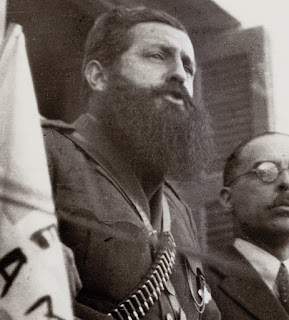 His words, in a letter published in “Rizospastis” in 1931, are characteristic of how much he valued his Party membership:


“If there is a moment in my life which I see with pride is when I entered the Communist Party. I became class-conscious, I learned my interest, throwing away the capitalist culture and threw myself in the struggle for the working masses, with faith, desire and heroism. Since then, I have nothing in my record but imprisonments and revolutionary struggle. Facts and reality speak themselves. Not a single stain. Is that against me? Is that against the Communist Party? It is an honor for me and a bigger honor for the KKE that I survived from the corruption of my consciousness and I adorned Klaras (himself), who was a lost case, only with pure revolutionary characteristics. The Communist Party purifies and creates fighters dedicated to the big case of the proletariat. It is the only Party that leads the exploited ones to the historical way: The final liberation of the proletariat. In this Party I gave my whole life and I will continue giving with all my powers, to its struggle, for the bread of the working people, for the revolution”.