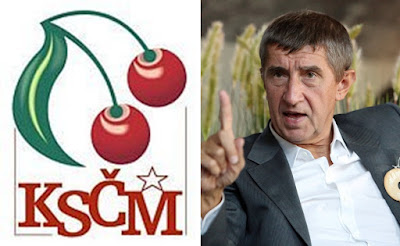 The 15 MPs belonging to the Communist Party of Bohemia and Moravia (KSCM) provided the votes needed to allow a pact formed between Babis’ neoliberal "Action of Dissatisfied Citizens" (ANO) movement and the Social Democrats (CSSD) to survive its first test, ending nearly nine months of political stalemate that saw the Czech Republic governed by temporary administrations.


According to a report by Russia Today, Babis won the party’s support by agreeing to their call to tax compensation that churches receive for property seized during the socialist years.

The decision of the CC of KSCM to provide support to a bourgeois coalition government creates reasonable concerns by communists both in Czech Republic and abroad. What will be the stance of the KSCM in the antiworker-antipeople policies that Babis' government will- sooner or later- implement?

The participation of a Communist Party in a bourgeois government is always an extremely dangerous risk which, almost certainly, leads to the ideological and political degeneration of the Party and the removal of its marxist-leninist characteristics.

What agreement can be made with a bourgeois government of a billionaire like Andrej Babis, which is committed to the country's affiliation with the murderous alliance of NATO, especially taking into account the Party's anti-NATO position? It should be noted that KSCM has expressed its firm opposition to any deployment of Czech troops abroad, including to the Baltic countries and Poland as part of NATO missions.