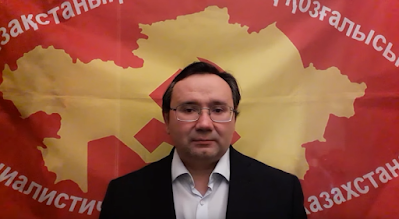 The ongoing large popular mobilizations in Kazakhstan do not constitute a “color revolution” or another “Maidan”, says Aynur Kurmanov, co-chairman of the Socialist Movement of Kazakhstan.

Speaking at the YouTube channel of the Russian Communist Workers' Party (RCWP), Kurmanov made some interesting remarks concerning the situation in Kazakhstan. “The main body of today's protesters in Kazakhstan consists mainly of workers in the oil/natural gas, metallurgy, mining sectors, as well as from unemployed youth”, Kurmanov pointed out and underlined that the starting point of the demonstrations were the strikes of industrial workers.
The factories where the strikes began, said Kurmanov, are predominantly owned by U.S. and British capital. “The factories where the strikes began are factories of Kazakh oligarchs and western partners, led by the Nazarbayev family” he added.

The co-chairman of the Socialist Movement of Kazakhstan stressed out that the popular protests in the Central Asian country have no similarity with the liberal/fascist movement in Ukraine, neither in social terms nor in terms of demands. “The demands are purely socio-economic ones... The first ones were demands for lower oil prices, wage increases and official recognition of trade unions”, Kurmanov said.

Aynur Kurmanov acknowledges that western intelligence agencies would be interested to hijack the popular uprising, but states that “seeing a color revolution here is nothing more than a conspiracy theory”.

In another interview, published in “Zanovo media”, Kurmanov debunks the conspiracy theorists who talk about a well-organized “color revolution”, underlining that the workers' mobilizations in Zhanoazen and Aktau became the fuse for a spontaneous wave of mass protests:

“This is not a Maidan, although many political analysts are trying to present it this way. Where did such amazing self-organization come from? This is the experience and tradition of the workers. Strikes have been shaking the Mangistau region since 2008, and the strike movement began back in the 2000s. Even without any input from the Communist Party or other leftist groups, there were constant demands to nationalize the oil companies. The workers simply saw with their own eyes what privatization and foreign capitalist takeover was leading to. In the course of these earlier demonstrations, they gained enormous experience in struggle and solidarity."
The leader of the Socialist Movement adds:
"The very life in the wilderness made people stick together. It was against this background that the working class and the rest of the population came together. The protests of the workers in Zhanoazen and Aktau then set the tone for other regions of the country. Yurts and tents, which protesters began to put up in the main squares of the cities, were not at all taken from the “Euromaidan” experience: they stood in the Mangastau Region during the local strikes last year. The population itself brought water and food for the protesters.”