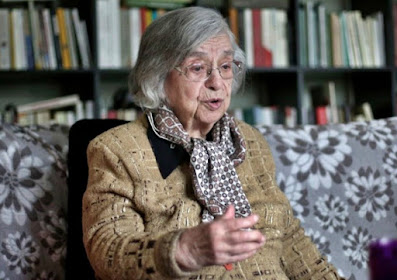 She was arrested twice for her political activity, the first on December 5, 1946, the second on July 7, 1947 and was sentenced to death five times. She remained in prison for 14 years, waiting for her execution every day. On November 23, 1959, he was released on bail.

In 1981, the publishing house “Hermes” published her first book “Fourteen Years”, a biographical account that presents her life from her arrest until her release, with illustrations of her own works that were created during her many years in prison. In 1992 she presented her second book entitled “Years of Pain”. He was a member of the Society of Greek Writers since 1984.

Comrade Maria, one of the thousands unbending fighters of the class struggle, was one of the last survivors of the notorious Averoff Prison, where she was in charge of imprisoned women's choir. She was married to communist poet George Sideris, with whom she met while he was imprisoned in Aegina prisons.

Maria had appeared in the 2018 documentary "O dromos mas" (Our path), produced by the Communist Party for its 100th anniversary, recounting moments from the life and activity of the detained women in Averoff Prison.

The KKE expresses its heartfelt condolences to her family and friends.