You can read the book reviews on the following links: When Joseph Stalin Demolished Grover Furr and A Scoop: Khrushchev as Trotsko-Bukharinite Plotter.

Below, we publish Grover Furr's full answer to "Historical Materialism":

I welcome the opportunity to respond to Jean-Jacques Marie’s reviews of my books Yezhov vs Stalin (YS) and Khrushchev Lied (KL) in the December 2021, issue of Historical Materialism.

I base my statements and conclusions in these books, as in all my research, on primary source evidence. Since the end of the USSR in 1991, an enormous number of documents from former Soviet archives have been made available to researchers. Marie must be aware of this new evidence. But he fails to engage it.

No wonder! This new evidence entirely dismantles the dominant interpretation of the Stalin years. This is a huge and important subject. I will limit my remarks to the fallacious statements in Marie’s reviews.

* Marie claims that it is “a fable” that Yezhov deceived Stalin and the Soviet leadership in massacring innocent people. He is mistaken – it is no fable. In YS I reproduce a great deal of primary-source evidence, from former Soviet archives, of Yezhov’s deception.

* Marie claims that by the end of 1938 Yezhov had killed 750,000 “men, women, and children.” This is false. The most accurate number is about 682,000. Why exaggerate – isn’t this bad enough?[1] There is no evidence that children were killed. Lavrentii Beria, who replaced Yezhov after the latter’s forced resignation in November 1938, in 1939 alone freed at least 100,000 persons who had been falsely convicted of counterrevolutionary crimes by Yezhov and his henchmen. (YS 114)

* Marie claims that Stalin’s 1939 rejection of further purges refers to “the repressions unleashed in 1937.” This is false. Stalin was referring to the Party chistka (= “cleansing” or “purge”) of members, normally for passivity or immoral behavior. This had nothing to do with the Yezhovshchina (Yezhov’s mass murders) although the word “purge” is popularly, though incorrectly, used to refer to Yezhov’s atrocity. It is astounding that Marie could be ignorant of this fact, which is perfectly clear in the transcript of the 18th Party Congress.[2]

* Marie claims “Furr is a confirmed supporter of Stalin …” This too is false. I want to discover the truth! If Stalin committed crimes, I want to know what they were. The only responsible way to do this is through identifying, locating, obtaining, studying, and drawing logical conclusions from, primary-source evidence. Like every researcher who wants to discover the truth, I work hard to maintain objectivity by taking concrete steps to avoid the fallacy of confirmation bias[3] that is all too common in the field of Soviet history.

* “Furr considers his [Yezhov’s] confession to be perfectly sincere.” Not so! I do what every objective research must do – assess the truthfulness of all evidence, including Yezhov’s statements, by comparing them with other evidence. If, in the future, more evidence comes to light, like any honest researcher I am ready to adjust or even discard my conclusions accordingly.

* People often ask me “Why did Khrushchev lie?” In KL I suggest some possible explanations. On pages 200-201, I list the conspiracies we know of that Khrushchev was involved in. All are familiar to historians of the USSR. Yet Marie falsely claims these are “unknown to all,” “of which nothing is known.” It is hard to believe that Marie is ignorant of them.

* Marie claims that the German-Soviet Nonaggression Pact of August 23, 1939 (Marie erroneously says “23 June”) contained a secret protocol “for partitioning Poland.” This issue has nothing to do with Khrushchev’s speech or with Yezhov’s mass murders, and so is irrelevant to any review of these two books of mine. Nevertheless, I will reply.

This protocol, the text of which is available on the Internet,[4] does not “partition Poland” at all. It divides the countries bordering on the USSR, Poland included, into “spheres of influence.” If, as everyone (except the Polish government) expected, Hitler’s army defeated the Poles, the Polish government would have all of Poland east of the Narew, Vistula and San rivers in which to form a rump Polish state hostile to Germany and therefore more amenable to an anti-Hitler alliance with the Soviet Union, France, and the U.K. It would also keep the Wehrmacht 300 km away from the Soviet border – a fact that probably saved Moscow from German occupation in late 1941.

However, the Polish regime betrayed its own people by interning itself in Rumania without even appointing a government-in-exile. Bereft of a government, Poland was a terra nullius, no longer a state under international law. [5] This left Hitler free either to occupy this area or – as we now know what his plan was – to set up a pro-Nazi Ukrainian nationalist regime there.

Under these conditions, the Soviets had no choice but to occupy Eastern Poland. Moreover, this same area had been part of Soviet Russia until 1921, when imperialist Poland had seized it.[6] Between 1921 and 1939, Poland severely repressed the non-Polish majority and sent “settlers” – osadnicy ---- as imperialist occupiers. It was these “settlers” whom the Soviets later deported. All this is well known to historians of Eastern Europe. How can Marie be ignorant of it?

* Marie states that “Stalin hand[ed] over to the Gestapo dozens of German Communists …” This matter too has nothing to do with Khrushchev’s speech or the Yezhovshchina and is irrelevant to any review of these books of mine. And, once again, Marie is in error. Interested readers can consult my short article on this subject. Marie references Heinz Neumann, but we have had evidence of Neumann’s guilt in an anti-Soviet conspiracy for many years.[7]

In his review of KL Marie refers to a “fantastical conspiracy of Trotskyists and rightists fabricated by Stalin.” But we have overwhelming primary-source evidence to confirm this series of interlocking conspiracies – the NKVD called it a “tangle” (klubok) -- which embraced followers of Zinoviev, Trotsky, other oppositionists, and high-ranking military commanders. I have studied the primary sources, with all appropriate scholarly skepticism, in a number of books.[8]

Marie falsely claims, “Furr takes at face value the confessions extorted from the defendants in the Moscow trials.” Nonsense! No responsible historian “takes” evidence “at face value,” and I certainly do not. I study the evidence from Soviet sources, and compare it (a) with other, independent Soviet evidence; (b) with evidence available from outside the USSR and thus beyond the ability of the Soviets to fabricate.

In reality, we now possess a great deal of primary-source evidence that the Moscow Trials defendants were guilty of at least those crimes to which they confessed, and that Leon Trotsky (who never confessed to any crime) was guilty of the crimes alleged against him, including conspiracy with Germany and Japan. Marie simply ignores this mountain of evidence.

Marie quotes from my discussion in KL of the 1944 deportation of the Crimean Tatars. Then he claims, without any evidence, “thousands of deaths during the transport.”

In 2011, when I published KL, I could find no primary-source evidence concerning the number of Crimean Tatars who died during the deportation. Today we have somewhat more. According to an NKVD report reproduced in several places, 191, or 0.126%, of the 151,529 Crimean Tatars deported to Uzbekistan, died in transit.[9] So much for Marie’s “thousands.” [10]

Marie claims that “[Furr] forgets, alas, to invoke the fate of the Volga Germans …” I did not “forget.” My book is an examination of the “Secret Speech,” in which Khrushchev did not mention the Volga Germans.[11]

* * * * *
Marie does his best to “personalize” these reviews through sarcasm and name-calling. But his disagreement is not really with me at all. His problem is with the evidence from former Soviet archives that is now ever more plentifully available to researchers, and the fact that this evidence tends to disprove his historical preconceptions.

… the dean of the younger generations of American historians of the USSR, is quoted by the prominent (and very anti-communist) Russian historian Yuri Zhukov as having said Soviet history is poisoned by Cold War "propaganda," and has to be done all over again.[12]

In the continuing flood of documents from formerly secret Soviet archives, it is truer today than ever that what we have all been taught about Soviet history – particularly about the Stalin era and about Stalin himself – is false, “poisoned,” and must be rewritten.

This is seriously disillusioning to many people, hence the widespread temptation to “disbelieve” it. Many people would rather “believe” that something is wrong with those who, as I do, question what all of us had for decades assumed true about the history of the Stalin period, than boldly confront the troubling challenge to our preconceived notions that is posed by the evidence from former Soviet archives.

No matter how disillusioning this challenge, we must accept it. We cannot build a better world on a foundation of falsehood. Only if we seek the truth -- no matter what it is, no matter how distasteful it may be even to ourselves -- can we learn the lessons, positive and negative, from the history of the Soviet Union.

The ancient Chinese work of history and philosophy “The Book of Han” urges, “Seek the truth from facts.” We must add: “And seek the facts from evidence.” I will continue to do so, however annoying it may be to Marie and others who remain mired in false historical paradigms of the past. 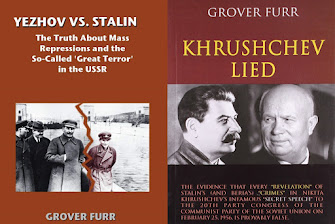 [1] For the primary-source evidence see my “Rejoinder to Roger Keeran,” MLToday December 7,2011, at https://mltoday.com/rejoinder-to-roger-keeran/ at note 6.

[2] See the section of Stalin’s report to the 18th Party Congress “1. Measures to Improve the Composition of the Party Division of Organizations Closer Contact Between the Leading Party Bodies and the Work of the Lower Bodies,” at https://www.marxists.org/reference/archive/stalin/works/1939/03/10.htm  In the Russian transcript it is on p. 28.

[6] These areas were integrated into the Byelorussian and Ukrainian SSRs and are now a part of Belarus and Ukraine. Poland no longer claims them.

[7] “Stalin Did Not Deport German Communists to Hitler.” At https://mltoday.com/stalin-did-not-deport-german-communists-to-hitler/

[11] Links to the official U.S. government translation of Khrushchev’s “Secret Speech” are at https://msuweb.montclair.edu/~furrg/research/kl/speech