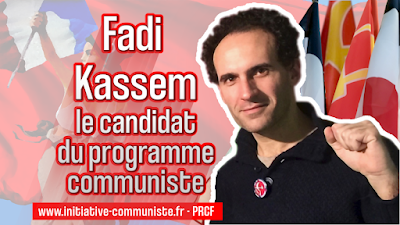 Numerous candidates will participate in the French presidential election which will take place on 10 April 2022. From current President Macron to Paris' mayor Anne Hidalgo and from leftist Jean-Luc Mélenchon to far-right demagogues Marine Le Pen and Eric Zemmour, all presidential candidates share a common characteristic: They are all committed to serve the bourgeois political system and protect the capitalist order in France.
But there is an interesting exception: The candidacy of Fadi Kassem on behalf of the Pole of Communist Revival in France (Pôle de Renaissance Communiste en France, PRCF), who expresses the "Red and Tricolor Alternative" in the presidential race, proposing a "frankly communist" political programme.

Kassem, the General Secretary of the PRCF, is a graduate of Science Po Paris, a history and geography teacher in secondary education and a trade unionist.

The Pole of Communist Revival in France, a member of the Initiative of Communist and Workers Parties (INITIATIVE), was founded in 2004 by a group of members of the French Communist Party who rejected the PCF's revisionist mutation.